Iran Denies That U.S. Destroyed One Of Its Drones 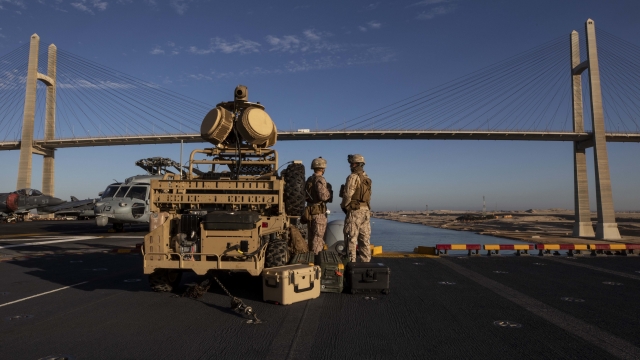 The Islamic Revolutionary Guard Corps says it has video evidence the U.S. did not shoot one of its drones, despite President Trump's announcement to the contrary. Press TV published footage from an Iranian drone surveilling a U.S. Navy vessel on Friday. The IRGC said the ships were monitored from the second they entered the Strait of Hormuz.

On Thursday, the Pentagon said the USS Boxer took "defensive action" against an Iranian drone in the strait. President Trump said the drone came within 1,000 yards of the Navy ship and ignored "multiple calls to stand down."

The president said: "This is the latest of many provocative and hostile actions by Iran against vessels operating in international waters. The United States reserves the right to defend our personnel, our facilities and interest and calls upon all nations to condemn Iran's attempts to disrupt freedom of navigation and global commerce."

A U.S. defense official said it was destroyed using electronic jamming equipment. But Iran called the U.S.' account "delusional," and said all of its drones in the area had returned safely.

Iran's deputy foreign minister tweeted: "We have not lost any drone in the Strait of Hormuz nor anywhere else. I am worried that USS Boxer has shot down their own UAS by mistake!"

Last month, the U.S. considered a direct military strike on Iran after it reportedly downed a U.S. surveillance drone. President Trump called off that strike, but The New York Times reported the U.S. quietly launched a cyberattack instead.