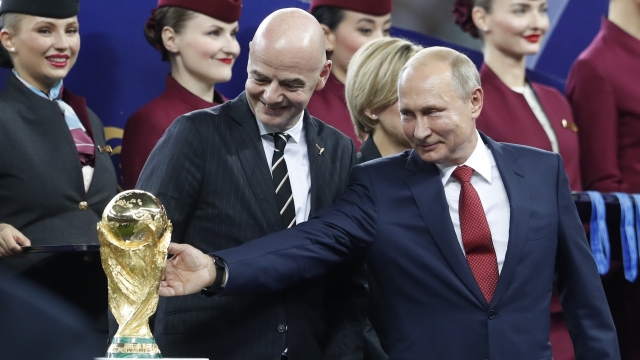 SMS
International Soccer Community Stands Up To Russia
By Ben Schamisso
By Ben Schamisso
February 28, 2022
The suspension includes qualifying matches for the 2022 World Cup, which were supposed to happen in three weeks.

International soccer is banning Russian teams from all competitions.

The move comes after soccer fans and players across Europe rallied in support of Ukraine.

"This is the biggest thing we've ever seen in sports, to be honest, and I do expect all the other sports now to follow suit," soccer broadcaster Alison Bender said.

Soccer is followed religiously by hundreds of millions, and protests on and off the field can be a lot more than symbolic.

Besides, Russia has spent years investing in international and European soccer — a source of pride and a propaganda device for President Vladimir Putin.

"I was a reporter based in Moscow for six weeks during the World Cup in 2018, and I could see just how much football meant to that country and Vladimir Putin," Bender said.

A matchup between Russia and Poland has been on the books for next month in a qualifying game for the men's World Cup. But following Russia's invasion of Ukraine, Poland has refused to play against Russia under any circumstances.

"Of course, Russian footballers are not at fault here, but this country has to face the consequences," Jakub Kwiatkowski, spokesperson for the Polish Football Association, said.

"Football is fully united here and in full solidarity with all the people affected in Ukraine," FIFA and UEFA said in a joint statement.

In an earlier ruling, the sport's governing body, FIFA, had said Russia needed to compete in neutral territory — with the country's name, flag and anthem banned.

But Poland and other European countries strongly rejected that initial decision.

Already, St. Petersburg has been stripped of hosting the Champions League final, the most prestigious club match in European football. The game will now take place in Paris instead.

"It's inconceivable that major international football tournaments can take place in Russia after the invasion of a sovereign country," British Prime Minister Boris Johnson said.

In other moves, European soccer clubs like Manchester United and Schalke are ending sponsorship deals with Russian companies.

Meanwhile Russian billionaire Roman Abramovich has handed over control of Premier league club Chelsea, for now, to its charitable foundation.

All of this as the International Olympic Committee is now recommending that Russian and Belarusian athletes be banned from any organized international competitions — just two days before the start of the Winter Paralympic Games in China.