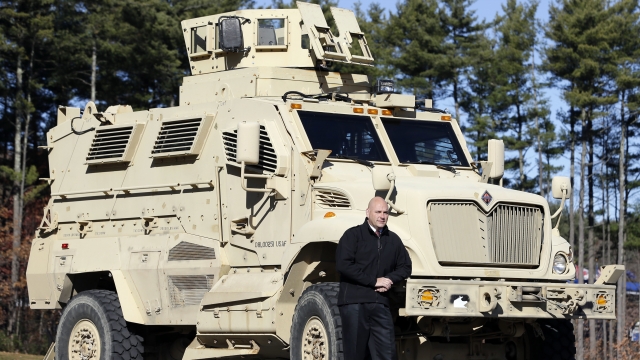 SMS
A Look At The DOD Program Giving Police Free Military Equipment
By Bailey Vogt
By Bailey Vogt
June 23, 2020
The 1033 program provides local agencies with everything from office supplies to helicopters that they wouldn't otherwise be able to afford.
SHOW TRANSCRIPT

While authorities responded to protesters in Minneapolis, the police department of nearby Cottage Grove debuted its newest piece of equipment: an over $700,000 armored vehicle it had received for free.

A police sergeant there told NPR the department received the mine-resistant vehicle through an initiative called the 1033 program.

"The 1033 program is a program which allows local governments to be able to get stuff from the federal government … free, or at least … at a minimum. It would be a dollar at most."

Dr. David Thomas is a 20-year veteran of the police force and now a professor of forensic studies at Florida Gulf Coast University.

The Defense Logistics Agency, which runs the program, reports it has provided over 8,000 law enforcement agencies with $7.4 billion worth of equipment since the program began in 1997.

Supporters say the program takes paid-for equipment that would otherwise collect dust at the Pentagon and gets it in the hands of police agencies that couldn't otherwise afford it.  Agency officials argued in 2016 that "there are people alive today who might have died if local law enforcement agencies didn't have equipment they got from the 1033 program on hand."

And to be clear, it's not all armored vehicles: Thomas says it offers things  like office supplies and rifles, as well as rocket launchers and helicopters. While military-grade equipment reportedly accounts for less than 1% of the agency's services, Thomas said there are very few roadblocks to receiving it.

"All it really is is a transfer. And so you're filling out a federal form saying you need this equipment … because it’s surplus for the federal government and it’s not being used. … So it’s just a matter of transfer and we get the item."

It came under scrutiny in 2014 after images of police using military equipment on protesters were broadcast to the world. It led President Obama to change the program in 2015, requiring agencies to state why they needed the equipment and mandating proper training before requests would be granted.

However, the Trump administration has reversed those changes. Then-Attorney General Jeff Sessions wrote in a memo: "It is not the responsibility of the federal government to manage non-federal law enforcement agencies." At the time, he pointed to hurricane relief efforts in Texas as reason that the program was needed.

Those rollbacks mean agencies can once again request any equipment they like. And Thomas says they don't always have a compelling reason.

"To say I have this just because. … And there's literally no reason for it. That scares me. ... I'm aware of tiny agencies in this country that have gotten this stuff who got it just because it was available. They didn't necessarily have a reason for it, but, in the chief’s eyes, the federal government is providing, so we got it."

While Thomas says there can be good uses for the equipment, he said local agencies need to address the lack of training given to officers before using it.

"If you're not mandating training and show that there’s a specific need to have this stuff, then what you've literally lined yourself up for is disaster ready to happen. I’ll say this to recruits all the time, I say it to law enforcement all the time: that law enforcement without oversight is a very dangerous proposition."