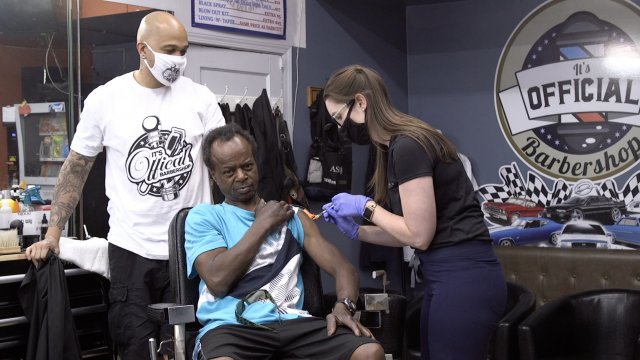 Inside this Chicago barbershop, Channel Coleman and her staff connect with customers over everything — rent increases, the Bears' new quarterback and new hairstyles.

But today's visits are a bit different.

Coleman has partnered with the City of Chicago to help vaccinate her clients and neighbors in Englewood, a predominantly Black neighborhood with the lowest vaccination rate in town.

The latest incentive to boost vaccinations? Get a cut for a jab at your local barbershop.

"That's the only way sometimes you can get people's attention," said Coleman, owner of It's Official Barbershop.

Weeks away from President Biden's goal of getting 70% of U.S. adults to get at least one dose of a COVID vaccine by Independence Day, Black Americans' inoculation rate remains far behind other racial and ethnic groups.

"The shots just happened so fast. I think that's what was kind of scaring people. And then you have people just having different reactions to it," Coleman said.

At this "Vax and Relax" event, people 12 and older received free haircuts and complimentary Six Flags tickets after getting Pfizer or Johnson & Johnson vaccines.

"I don't want to see my daughter die. Nobody wants me to see nobody dying," said Jennifer Smith, a regular at the barbershop, who came to vaccinate her 12-year-old daughter.

She was horrified by the story of a 15-year-old girl in the Chicago area who died two days after testing positive for COVID.

"It touched my heart. So it made me get vaccinated and decide to get her vaccinated," Smith said.

Vaccination among Black Americans has stagnated despite ramped-up efforts by the Biden administration to reach vulnerable communities.

"A lot of people have, you know, thought about 'what's going to happen maybe five or six years later with this shot?'" Smith said.

Health experts cite many factors: lack of access, inability to take time off work to recover from the vaccines' possible side effects and distrust of the U.S. government for its historical failures on Black Americans' public health.

"Work still needs to be done to improve racial and ethnic equity, not just with the vaccine uptake, but with regards to health care access in general," said Nambi Ndugga, a policy analyst at the Kaiser Family Foundation's racial equity and health policy program.

Ndugga says barbers and other small business owners can play a huge role in their neighborhoods because they are often much more trusted than authority figures.

"We know that for particularly for Black Americans getting that information from trusted sources, which includes their barbers, hairdressers, has been incredibly successful in putting out information about the vaccine and increasing vaccination uptake so far," she said.

The turnout at the Chicago's 'Vax & Relax' event was modest. But Coleman hopes it will have ripple effects in her community.

"If we all continue as a team to keep showing them how positive this could be to get a shot, then I think it will pick up in time, I think it'll pick up," Coleman said.