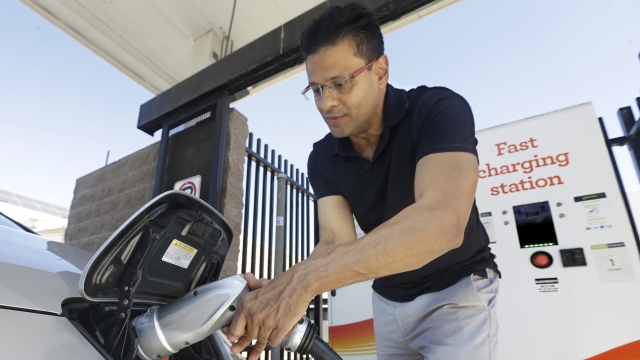 This new funding will help the U.S. start moving toward Biden’s goal of electric vehicles accounting for half of all new car sales by 2030, but experts tell Newsy this federal funding will likely not be enough to kick EV adoption into high gear.

"We're looking at over 30% of the vehicles by 2030 sold here will be battery electric vehicles," he said. "For us to get to that point of market saturation, or where the Biden administration would like for it to go, I think we will end up seeing some form of standardization just so people can feel comfortable when they're out traveling, not having to worry about, 'let me find my specific network of chargers so I can plug in right now.'"

Biden's plan intends to help fix what’s known as range anxiety — the fear that your EV will not get you as far as you need to go before another charging station becomes available.

That's a key issue for consumers. The Tennessee Valley Authority, the largest public utility in the U.S., told Newsy that their customers commonly cited worries about being able to recharge as a reason for not buying an electric vehicle.

"If you look at the infrastructure that's out there now, specifically fast charging, the majority of it is concentrated in the major cities, the Nashvilles, the Knoxvilles," said Tennessee Valley Authority's EV Program Manager, Drew Frye. "We're looking to put fast chargers every 50 miles along not just interstates, but US and state highways, really trying to connect all of our communities together and give that basic foundational network. "

Utility companies, who will oversee the power necessary to charge those vehicles, say the federal funding for charging stations helps alleviate some range anxiety concerns, but they see EV adoption as being equally shaped by local and state governments.

"We're eagerly watching how the how the infrastructure bill turns out at the federal level," said program lead for EV infrastructure at Eversource, James Cater. "But that hasn't stopped the local and state level here in New England and Massachusetts, Connecticut especially from advancing the conversation about reduction in greenhouse gas emissions through the electrification of transportation […] Massachusetts has articulated a goal of reduction of greenhouse gas emissions by one hundred percent by 2050."

According to Cox Automotive and Kelley Blue Book, electric vehicle sales made up just under 8 percent of the nearly 4 million vehicles sold in the U.S. during the first quarter of 2021, so getting them up to 50% by 2030 will be ambitious.

Utilities and market analysts told Newsy that beyond funding, getting more people behind the wheel of an electric car relies on educating more people about what they can expect as EV owners, like where they're going to recharge.

"We know that, for those who are so able, who have a driveway, have a garage, are going to do 80% of charging at home," Cater said.

"I've heard reports that stated range anxiety goes away after a couple of weeks of ownership. Once they realize, like, you know, I actually can go where I want to go and I don't have to worry about not being able to get back home. I've always stated that we're not just looking for people buying a different car," Lindsay said, "We're looking for them to change the relationship with the car that they've had all their lives."