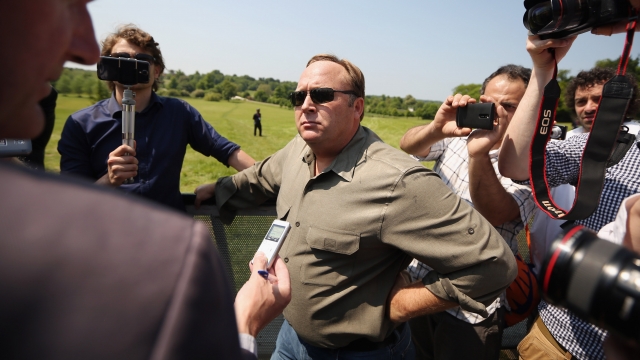 Attorney Mark Bankston asked, "The truth is, Mr. Jones, you were the first person in the world to make the false flag theory about Sandy Hook, and you did it before the bodies were even cold. That's the truth?"

"InfoWars" host Jones is fighting a defamation lawsuit from the families of the people killed in the Sandy Hook Elementary School shooting. He has repeatedly claimed the shooting that took the lives of 20 children and six adults was a hoax and that those involved were actors.

He underwent a three-hour video deposition, and on Friday, the families' lawyers released the video to the public for the sake of "transparency." This is not common. According to The Washington Post, a video like this usually wouldn't be released until the case goes to trial.

But according to one of the lawyers, Jones "has tried to do everything he can to try his case in the media." Both he and his lawyer have talked about the lawsuit on his show, "InfoWars."

In the deposition video, Jones' main arguments center around a few things: He says he didn't start the hoax, that videos shown of him are out of context and that questioning news events is a "boilerplate" responsibility.

"I know that I didn't start it. And I think it's a boilerplate. Anytime there's a big public event, like Jussie Smollett or babies in incubators in Iraq, a lot of people question, you know, whether it's real."

He also said he may have believed conspiracy theories like the one about Sandy Hook because of "a form of psychosis."

He said, "And I, myself, have almost had, like, a form of psychosis back in the past, where I basically thought everything was staged, even though I'm now learning a lot of times, things aren't staged."

Jones didn't acknowledge that he'd caused the families any pain but said he is starting to have a more moderate perspective.

He said: "So long before these lawsuits, I said that in the past I thought everything was a conspiracy, and I would kind of get into that mass groupthink of the communities that were out there saying that. And so now I see that it's more in the middle. All right? So that's where I stand."