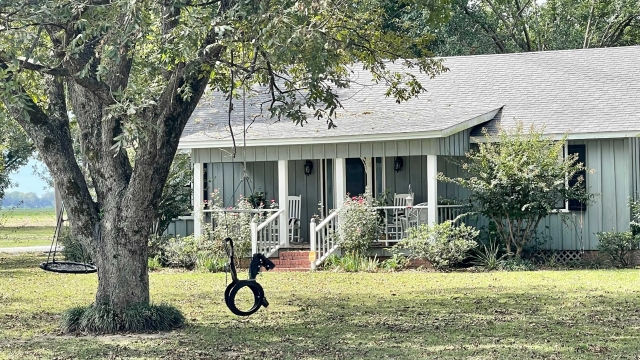 Nationwide, there is an OBGYN shortage, and living the rural life isn't an easy selling point for recruiters.

The Mississippi Delta — king of catfish and cotton and the Delta blues — a place that sometimes seems frozen in time.

Many gravitate to the old ways of doing things. Change is hard, but Mississippi Delta native Dr. Lakeisha Richardson, an OBGYN at Delta Health-Medical Group Women's Healthcare Clinic, says it's necessary to change the trend of babies dying.

"Unfortunately, there are a lot of traditions or cycles that really need to be broken that older women pass down to our younger moms that have worked or for babies that have survived," Richardson said. "But then when you have that one baby that doesn't, then it's like, 'Oh, where did we go wrong?'"

Dr. Richardson not only grew up in Indianola, Mississippi, but came back after school to raise her family here.

Mississippi leads the nation in infant mortality rates. For every 1,000 babies born, 10 of them die. In Mississippi, half of the state's population lives in rural areas. The Delta region in northern Mississippi is one of those areas. These communities are more likely to suffer from health inequities.

Women in the Mississippi Delta aren't the only ones fighting this infant mortality battle: Women in Arkansas also live in rural areas, with many of them having to drive over the U.S. 82 Greenville Bridge just to see doctors on the other side. It's a long drive, especially when you're expecting.

"They come from all over, unfortunately," Richardson said.

Unfortunately, because it could be a dangerous drive.

New mother Tara Winfrey Hawkins started having contractions on her way to an Arkansas hospital.

"The hospital that we called in, Lake Village, told us they didn't have a OBGYN doctor and that if the baby wasn't already coming out, I had to keep going to the next hospital," she said.

Hawkins delivered her baby in time, safely, but the hospital was almost an hour away.

"I was worrying about the doctor who said my uterus was a little tilted, so I was worried about if the baby was going to be able to come out the way he needed to or if there was going to be a umbilical wrapped around his neck because of the way I was sitting in the car," she said.

Those who live in a big cities have the luxury of driving five, 10 or even 15 minutes to the doctor's office, and the selection of doctors are vast. Rural areas do not have the same comfort.

The drive for them is 30 minutes to an hour, and the selection of doctors and specialists is a small group to choose from. Those specialists in a place like the Mississippi Delta add an hour or more depending on where the doctor's office is located.

Nationwide, there is an OBGYN shortage, and living the rural life isn't an easy selling point for recruiters. So, the Delta region deals with packed waiting rooms and some doctors see long days.

TAMMY ESTWICK: "On average, how many patients do you see on your OB days?"

LAKEISHA RICHARDSON: "Minimum would be 40, anywhere up to 60 or 80 — just depending on where we are in the volume."

That volume isn't good for doctors who may feel rushed in the exam room. It also isn't good for patients who don't get a pool of doctors to pick from.

"You know, these southern moms like giving greens and corn bread, like, 'Oh that baby can have some cornbread likker, and I'd just be like, 'Uh, no, they can't.'"

Richardson says while many new moms try to do the right thing, they're heavily influenced by well-meaning elders.

"Diluting loan formula, you know, when you have moms that are on WIC and WIC only gives you a certain amount of formula per month and they don't want to buy any additional formula. You know, somebody tells them, 'I'll just dilute their formula.' You know, 'You don't have to do what the instructions say.' 'Just give it a little bit more water.' And you know, for babies, too much water is bad. And so then you have a baby coming in with this malnutrition, is dehydrated or this hyponatremia because they've been getting diluted formula. Then you have a death," Richardson said. "So the pediatrician is saying, 'This is what you do. This is what the baby can have.' But then they go home and Mom and Grandmama says, 'Oh, the doctor know they talking about this. The same thing I gave you. This baby can have this.' And so who do they trust? You know, do I trust my 80-year-old grandmother and my 50-year-old mom or my pediatrician that I just met two weeks ago?"

Those old ways are just a part of the problem. Doctors say woman are having babies later in life and insurance companies can hold up medical care, like access to the right drugs to stop pre-term delivery.

"You'll be surprised how much we have to fight insurance companies for just the basic care that our patients need. I have a patient now — We have to get prior authorization for every single thing for her pregnancy, for ultrasound, for blood work, for her prenatal appointments. So every time you do that, that's a two-week delay in care when they already know what the standard of care is," Richardson said. "So why do we have to get this authorized from you? Because I don't want to pay for one, because they're hoping that we won't do it. And this young lady won't get prenatal care and just get pushed straight and just come in and have a baby and they save all this money from not having to do what they're supposed to do."

Someone has to stay in this community to help. Richardson says she's happy to try to turn that trend around.

"Some days, I feel like if I weren't here, those numbers would probably be twice as high because, you know, not everybody is going to go the extra mile — Reach out, call mom, try to do that extra education," she said. "And I feel like, you know, ultimately, I never wanted to come back to Mississippi. So this is why I feel like this is where God wants me to be right now. This is where I need to be."

Those old ways are just part of the problem. Somehow, we need to give way to new ideas and help make these rural communities stronger.

More from An Early Grave: Crisis in Rural America

Rural America Is In Need Of More Doctors

Though 1 in 5 Americans are "rural," fewer than 10% of doctors practice medicine in small towns.

The Lack Of Mental Health Services In Rural Areas

In Colorado, mental health care facilities are concentrated in bigger cities and harder to find for the roughly 720,000 people living in rural areas.

In many cases, these rural hospitals are the heart of a small town's economy.