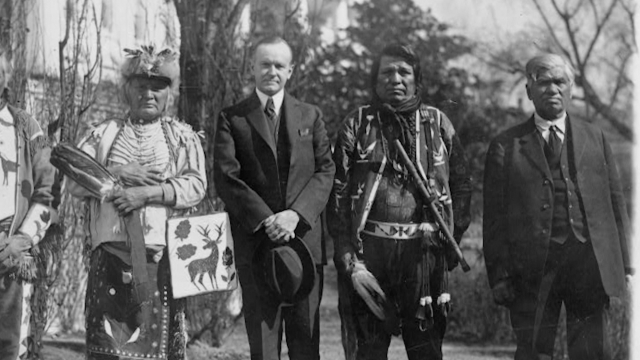 The history of voting for Native Americans is complicated.

Native people weren't citizens of the United States until 1924, and it wasn't until 1948 that Indigenous people got the right to vote.

Some couldn't access the ballot box until 1962. That's because some states didn't want Native people participating in general elections.

Despite recent gains and the high turnout of Native voting in recent elections, many say barriers still exist to casting a ballot, like when Montana passed two laws to end same-day voting registration and ballot collection.

"What I would just like people to know is that, you know, we always think of the long lines in Georgia and Texas, but this is what voter suppression looks like in Indian country," Samantha Kelty, attorney for the Native American Rights Fund, said. "It's an intentional and clear-cut exploitation of the current vulnerabilities that the community faces."

The Native American Rights Fund recently filed an injunction in the state of Montana to prevent two laws from taking effect: House Bill 176, which would end same-day registration, and House Bill 530, which would end organized ballot collection in rural parts of the state, where many tribal citizens reside.

Kelty says allowing same-day registration and ballot collection are key for Indigenous people in Montana if they want to be able to vote.

"Rural tribal communities across the seven reservations in Montana depend on Election Day registration and ballot collection to participate in elections," Kelty said. "Election Day registration allows Native Americans to register and vote in just one trip to a polling center. Registration for Native Americans in Montana is often only available at the county seat, which is a long ways away. For example, some Blackfeet tribal members have to travel over 120 miles to register to vote at the county seat."

During the 2020 Election, Indigenous voters were key to President Joe Biden winning counties in Arizona, Wisconsin and Minnesota. Although they represent a smaller portion of the electorate, Indigenous voters can wield a lot of power.

Organizers across the country drove hours, sometimes going house to house to make sure voters on reservations were registered to vote in what was one of the most notable elections in recent history.

The Native American Rights Fund says across the board there are many barriers to voting.

The group released a report in 2020 that drew on hundreds of interviews from citizens of  tribal nations across the country.

Long distances to polling places, lack of a physical address and a digital divide were things some said kept them from voting.

One of the key things the Native American Rights Fund recommended to improve access:

"So what we're looking at now is the freedom to vote," Kelty said. "John R. Lewis Act, the For the People Act is the one that expands and protects voting rights. I think that excitement from the 2020 election is continuing. The native turnout was huge and made a difference and people saw that ... so I hope that we see a big turnout for the midterm elections as well."