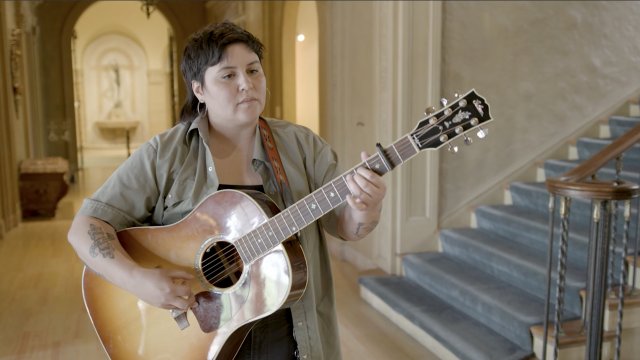 Kalyn Fay’s musical influences range from country to disco to pop. Family, culture and her relationship to the land in Oklahoma all figure into her music, as well as her Cherokee heritage.

"I grew up in Oklahoma all over the place," Fay said. "I was in Okmulgee, Okemah, Claremore and then in Tahlequah, and now I live in Tulsa, Oklahoma."

That’s why she wanted to perform on a new album called "Anvdvnelisgi," written and sung all in the Cherokee language.

Anvdvnelisgi means "the performer" in Cherokee, and it features reggae, folk and hip hop.

The album is part of a nationwide trend in Indigenous communities to engage younger and newer language learners to become speakers and to revitalize Native languages.

Ojibwe language speaker, teacher and author Anton Treuer says languages need to be social — not just academic — for them to survive and thrive.

"It's just two generations to break down, you know, a language community, but this is where things like the immersion schools are so powerful," Treuer said. "It's not just because of the academics within the immersion schools; it's because it creates a language nest, a safe space and the kids are hollering at each other in the target language, the tribal language on the playground. And that's where a lot of the success comes."

Cherokee Nation has invested heavily in their language immersion programs to help new language learners. Right now, there are fewer than 2,000 Cherokee first language speakers; those are people that grew up with Cherokee as their first language.

Kathy Sierra is one of those fluent Cherokee speakers. She teaches at Cherokee Nation’s immersion school for adults. She helped translate some of the songs on the album into Cherokee.

"It's a great thing because I'm just glad that in one way or another, we're passing the language on to someone else, you know, and that even if it is by song, at least it's getting out," Sierra said. "You know, for the kids to understand and to see that they to try to learn this language, you know, somehow we've got to help them, and music is a good way."

Treuer and others point to the Māori in New Zealand, where it’s the country’s official language, as an inspiration to Indigenous language learners and speakers in the U.S.

There are numerous bands, musical genres and films all in Maori that reflect Maori culture and way of life.

UNESCO, the United Nations branch focused on culture, identified this decade as the decade of Indigenous languages. Experts like Treuer hope that will mean more financial support for language immersion schools and projects like the Cherokee album Fay performed on.

Fay's dad was the youngest of nine children, most of whom grew up speaking Cherokee. She said he didn’t have the opportunity to learn the language.

"There's a weird relationship to western society and being successful in these spaces, and I think they really wanted my dad to be successful and to be able to support his family and our overarching family, and so they didn't teach him Cherokee ," Fay said.

She thinks a lot about her dad and the sacrifices he had to make in order to support her.

"And for me, it feels like me doing these kinds of things is giving that back to him in a way, and supporting him and saying like, it's okay that we can be openly Native," Fay said.

Fay is part of a generation that is embracing their heritage and language —  something they see as a key to success.

"So language isn't just the spoken language," Fay said. "It's an embedded way of knowing the world, like our whole entire understanding of the world is embedded in that language."

That is something she will keep singing about on future albums.