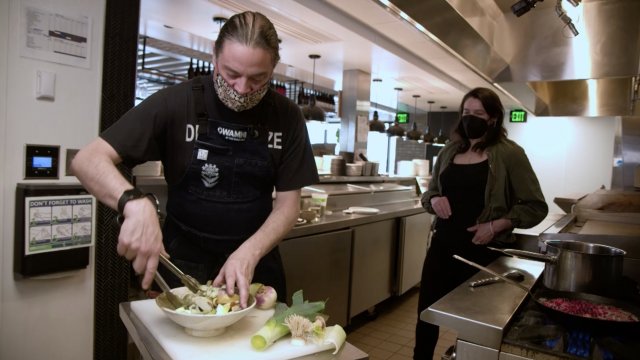 Chef Nico Albert in Tulsa, Oklahoma and chef Sean Sherman in Minneapolis, Minnesota are taking their knowledge of Indigenous cooking to the next level.

Both use the phrase "de-colonizing your diet" which means taking away processed and commodity foods like flour and sugar and shifting to food that Indigenous people used to eat before European contact.

Albert is a Cherokee Nation citizen, a singer in a metal band and the owner of Burning Cedar Indigenous Foods, a catering company she founded in Tulsa after working as the executive chef at Duet, a jazz club and restaurant in the city's art district.

Her goal is to make Cherokee cooking and Native cuisine more visible.

"In everything that I do as far as Indigenous foods and the work of food sovereignty, it's about reestablishing our connection with our traditional foods, establishing a connection between the land, the people that are growing the food, the process of of growing food," Albert said.

The term food sovereignty in the context of Indigenous food and Native chefs means growing your own produce, raising your own bison and sometimes using heirloom seeds to grow that produce. It's also about eliminating sugar, wheat flour and starch-commodity staples that are unhealthy and were never part of an Indigenous diet.

One of the dishes Albert makes is a bison meatloaf.

"It’s a recipe I've adapted cause I’ve been making meatloaf forever," she said. "It’s a pretty basic staple.I just use bison instead of ground beef."

That bison is locally raised on the Osage Nation's bison ranch in Hominy, Oklahoma. The tribal nation raises its own herds there and sells the meat to restaurants, caterers like Albert, as well as making it available for the public.

"They got that money to open the meat processing plant through the federal COVID relief funds, and they invested that in food sovereignty, which is a fantastic example of what our tribes need to be doing," Albert said.

Then there are the heirloom seeds she grows for the food she makes — the cooking ash used in traditional Cherokee bean bread and vegetables like Cherokee tan pumpkins. Every seed has a story.

In Minneapolis 700 miles north, Oglala Lakota citizen Sean Sherman is creating a food sovereignty movement of his own.

The Sioux Chef, of which Sherman is a co-owner, is a James Beard award winner and has been on the New York Times' and Esquire' "Best of" lists.

In the summer of 2021, he and Thompson - The Sioux Chef's co-owner -launched their restaurant, Owmani. It sits on the banks of Ha Ha Wakpa, the Dakota word for the Mississippi River.

"The name of the restaurant, Owamni, is based off of what used to be these beautiful waterfalls right outside the window which were called Owmani Wamni, or place the following swirling water," Sherman said.

Like Albert, the food in Sherman's kitchen is local. He uses wild rice from tribal nations in Minnesota, produce from local growers and protein like ducks and bison from local ranchers. The coffee, tea, wine and beer are also from Indigenous sources from the U.S. and Mexico.

The restaurant isn's just about feeding people — it's a movement to de-colonize food sources and get bot Indigenous and non-Indigenous people  connected back to the land.

"Things like blue corn mush and harmony with chili or wild rice, of course, and getting antelope and bison and rabbits and quails and crickets," Sherman said. "So there's just there's a lot of opportunity for us to be really creative with Indigenous foods, and we're just creating a place where that can happen."

Sherman hopes someday everyone will be able to drive across America or Canada and be able to experience the immense diversity of Indigenous foods in every region, and Albert wants to use the platform she's been given as a Native chef to educate people about Cherokee cooking and Indigenous foods from all over.

"Part of the health and wellness work that I do and the food sovereignty movement is reestablishing a connection from the plate backwards to where did this food come from?" Albert said. "How does it benefit our people and our communities? And thereby, it benefits our bodies."