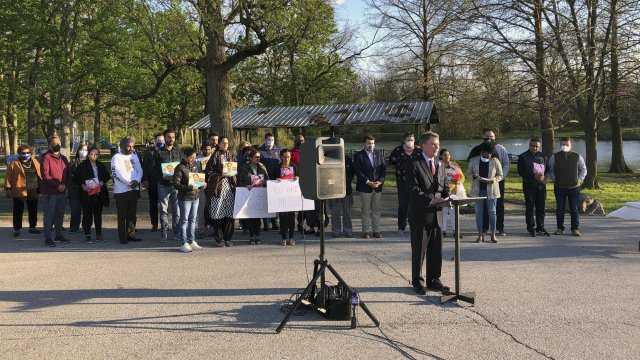 SMS
Indianapolis Sikh Community Reels From Loss In FedEx Shooting
By Alex Arger
By Alex Arger
April 18, 2021
More than 200 attended a vigil Saturday to call for change, with members of the Sikh community standing alongside city officials.
SHOW TRANSCRIPT

"We go everywhere," Maninder Walia said. "We're all one family so if tragedy has occurred in a particular side of town we're all together."

Shock waves through the tight-knit Sikh community in Indianapolis — reeling from losing four members in last week's mass shooting at a FedEx warehouse.

More than 200 people attended a vigil at a park there Saturday evening, where a representative from the Sikh Coalition joined the city's mayor to call for change in gun laws and remember those killed in the shooting.

"I have to be honest," Indianapolis Mayor Joe Hogset said. "I keep coming back to one question. Loving God, what more can we take?"

About 90% of the workers at the FedEx warehouse are members of the local Sikh community...a religion that began 500 years ago in India and counts as many as 10,000 believers in Indiana.

Authorities haven't publicly speculated on the motive. But a leader from the Sikh Coalition says it's hard not to feel targeted, given the warehouse was well known for its high number of Sikh employees and the ongoing attacks against Asian Americans that have spiked during the pandemic.

"Hate is an epidemic in this country, and that's not just focused on Sikh communities, it's we saw it in Atlanta only a few weeks ago," Satjeet Kaur, Sikh Coalition executive director, said. "We see it month after month. We see it week after week across the country. "

The Sikh victims ranged in age from 48 to 68, including Amarjeet Johal, a grandmother who had planned to work a double shift that day.

"It's going to be a long process," Maninder Walia said. "You know, and time is the best healer."