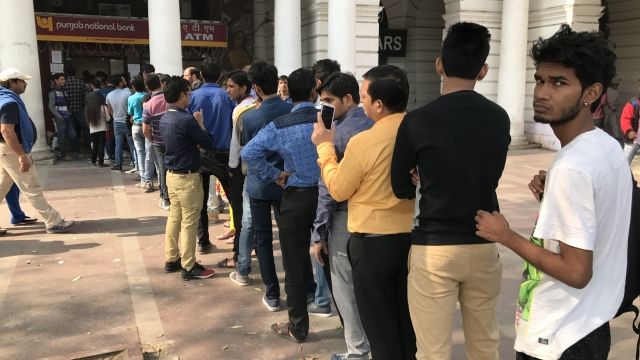 Imagine being told the $50 and $100 bills in your wallet are worthless. That's what happened in India. And then this happened: People spent hours in line at ATMs, and banks ran out of money.

The sudden change was an effort to fight corruption and black money — money that dodges taxes or is illegally obtained.

In his announcement, Modi said, "The 500 and 1,000 rupee notes hoarded by anti-national and anti-social elements will become just worthless pieces of paper."

The rupee denominations not affected by the change are the 5, 10, 20, 50 and 100 rupee notes. India also uses coins for smaller denominations.

It caught the country by surprise, and Indians rushed to the banks to exchange those two bills.

New 500 and 2,000 rupee notes are replacing the old bills. But production of the new bills is lagging far behind exchange demands.

Modi encouraged his citizens to switch to electronic payments, like credit or debit cards. But that's a big change for a country that completes 90 percent of transactions in cash.