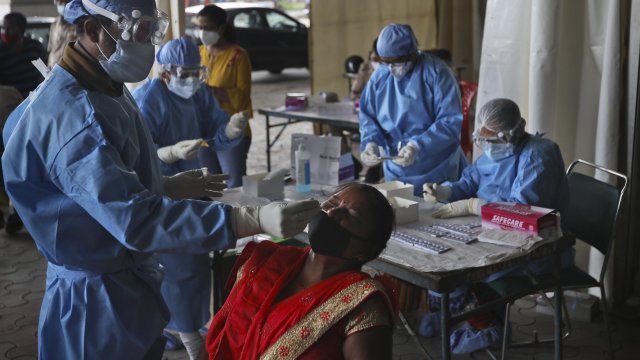 SMS
India Passes Three Million Cases As Experts Worry About Rapid Tests
By Alex Arger
By Alex Arger
August 23, 2020
As India passes a milestone of case numbers, experts worry the country is relying too heavily on cheaper, rapid tests that can give false negatives.
SHOW TRANSCRIPT

The country has become the leader in new daily infections as the disease hits poorer and older populations.

But even though cases reached the 3 million mark, new infections have leveled off in India's two largest cities. Now more rural areas with worse healthcare systems are feeling the brunt of the virus growth in India.

The country has relied on cheaper, faster tests to keep up with the spreading virus since June. But experts are warning these rapid tests can miss infections.

These antigen tests often fail to detect the virus in patients in the early days of their infection. And experts say people aren't getting retested regularly after getting uncertain negative antigen test results.

Close to a third of India's daily tests are antigen tests while it rations the use of more precise molecular tests. Experts say the two tests need to be looked at separately to see the infection spread, and India isn't doing that.

With a population of 1.3 billion people, India has the third highest caseload of the virus in the world, behind Brazil at number two and the United States at number one.