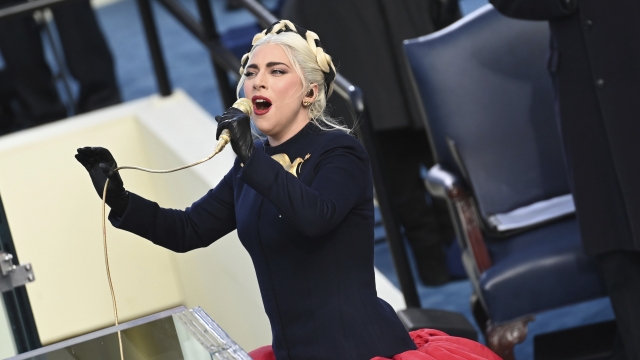 SMS
Inaugural Performers Tend To Pack A Political Message
By Cody LaGrow
By Cody LaGrow
January 20, 2021
From Lady Gaga to Ricky Martin, singers can be a symbol of change to come to America.
SHOW TRANSCRIPT

Music sets the tone at every party, and the Inauguration is no different. Who sings and what song is as symbolic as the Inaugural Address itself.

So, let's unpack the soothing sounds of peaceful transfers of power.

Putting his "paw up" is President Joseph R. Biden. The newly elected Head-of-State called on Lady Gaga to sing the national anthem at his Inauguration. And, Mother Monster has not steered away from politics.

Gaga's message has always been about inclusion. She's been an advocate for Women's Rights, the LGBTQ+ community, mental health and anyone with a disco stick.

J. Lo's Super Bowl halftime performance raised awareness about the Trump's administration's immigration policies. And her presence is right in line with the turning of a presidential page.

The 45th President of the United States picked Jackie Evancho to sing his National Anthem. If you're wondering who that is, you are not alone.

Trump's election was controversial from the start, reportedly making it harder for the administration to book A-list talent.

Nevertheless, Trump made his mark with the music choice. At his Inaugural Ball, the Trump's swayed to Frank Sinatra's "My Way."

It's all part of a rich tradition of choosing Inauguration performers that make a point.

Bill Clinton booked outspoken advocate, Michael Jackson, to sing "Gone Too Soon" in 1993 in the middle of the HIV/AIDS epidemic.

Ricky Martin sang at George W. Bush's Inauguration in 2001. He performed "The Cup of Life," a Spanglish version of his song "La Copa De La Vida" amid the Latin explosion in American culture.

He got two queens, Aretha Franklin and Beyoncé, to sing the national anthem at each of his Inaugurations.

In 2009, Beyoncé sang Etta James's "At Last" for Barack and Michelle's first dance. And sure, the lyrics could be a nod to a nation electing their first Black President. But, Etta James saw it differently.

James told a Seattle concert crowd shortly after, "I tell you, that woman he has singing for him, singing my song, she gonna get her a** whipped ... I can’t stand Beyoncé, she had no business up there singing ... my song that I’ve been singing forever."

Etta James later said it was a joke. Hilarious.

According to the BBC, Washington's wife could not make his Inauguration. And, he tore the floor up with various guests who were not her.

It was a shady swing dance that proves America been messy via music in its quest for equality and justice for all.