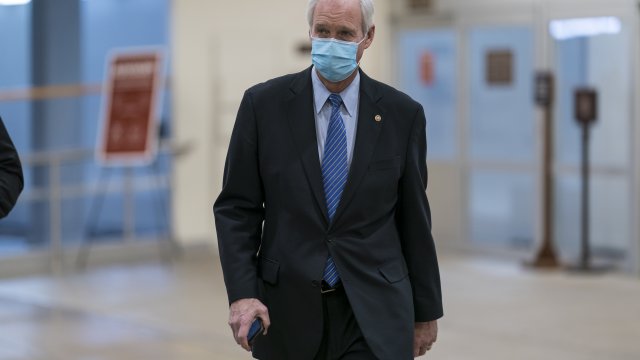 Sen. Ron Johnson is taking fire for what his critics call racist comments about the Capitol insurrection. The Wisconsin Republican said he did not feel threatened by the rioters — but he would have, if they had belonged to Black Lives Matter or Antifa. He also said the attackers "love this country...respect law enforcement...and would never do anything to break the law."

Mary Ellen LaPorte, Franklin, Wisconsin: "I believe that he is a racist."

In Milwaukee, Democrats like Laporte are eager to be rid of Sen. Ron Johnson.

LaPorte: "He comes up with conspiracy theories that don't make any sense. And they aren't who we are."

The Republican senator hasn't announced if he'll run for re-election next year in Wisconsin. But he has drawn national backlash for his conspiratorial and racially loaded claims, saying this about the insurrectionists who attacked the Capitol on January 6th. Sen. Ron Johnson, (R) Wisconsin: "Now, had the tables been turned — Joe, this could get me in trouble — had the tables been turned, and President Trump won the election and those were tens of thousands of Black Lives Matter and Antifa protesters, I might have been a little concerned"

Johnson: "There were no racial undertones in my comments."

All of this comes after Johnson also promoted conspiracy theories about who actually led the mob.

Johnson: "A very few didn't share the jovial, friendly, earnest demeanor of the great majority. Some obviously didn't fit in and he describes four types of people — plain clothes militants, agents provocateurs, fake Trump protesters and then disciplined uniform column of attackers. I think these are the people that probably planned this." There is no no evidence of that.

Democrat Michael Migliaccio says spreading these falsehoods is breeding divisiveness. Migliaccio, a Franklin, Wisconsin resident said: "It was complete malarkey, it was fabricated, it was a lie what he said. Find out what went wrong that day. Fix the situation, so that it never happens again."

But in Milwaukee's more conservative suburbs, some as still supportive of Johnson.

Chad Deznanski of Pewaukee, Wisconsin said, "I like his policies. I like what he stands for" — even if they don't stand by his latest comments about January 6th.

Others say surely the senator has the facts to back up his claims.

Michael Schafer, Waukesha, Wisconsin, resident: "I have not heard his specific comments, but I'm sure whatever they were they were probably appropriate for his observations of what actually transpired on January 6th."

Wigderson, editor-in-chief at RightWisconsin.com: "He is still seeing himself as a leader of a Republican Party in Wisconsin that supports him, and believes in him, and he doesn't see the damage that he's doing."

Widgerson says Johnson certainly has a base of support in Wisconsin, but plenty of other Republicans are ready to see him retire.

"I'm getting e-mails from, from people that were longtime Republicans that are saying, 'what the heck happened to Ron Johnson and what is going on with our Republican Party?'"

Democrats see Johnson's seat as a pickup opportunity next year. Two Democratic candidates have already announced their runs, while three others are considering throwing their hats in the ring.