In Tennessee, Confederate Monuments Are Still A Sore Subject 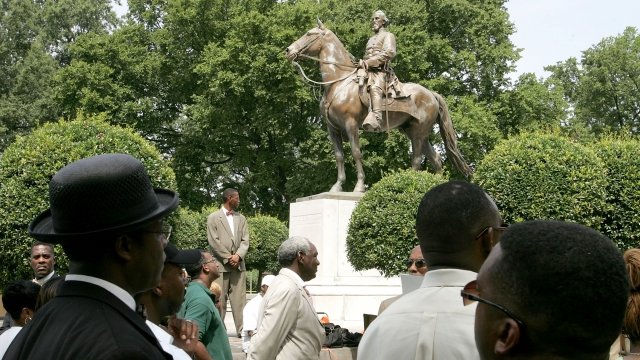 Tennessee State House representatives voted to strip Memphis of $250,000 for its upcoming bicentennial celebration. But what might've been intended as a typical budget procedure, turned into a fight over how the city removed Confederate monuments last December.

"Let me not mince words: This is the most vile, racist … let's call it for what it is," Rep. Antonio Parkinson said.

"Today is a demonstration that bad actions have bad consequences, and that my only regret is that it's not in the tune of millions of dollars," Rep. Andy Holt said.

In December, we reported how the city had to get creative to remove two Confederate monuments. Memphis' City Council voted to sell the park where the monuments were located to a nonprofit. That group eventually removed those statues.

This came in the midst of a nationwide effort by many protesters and lawmakers to re-examine the nearly 1,500 symbols dedicated to the Confederacy in public spaces, which included around 700 monuments. Those numbers are based on a 2016 report from the Southern Poverty Law Center.

On Confederate monuments, Alabama Gov. Kay Ivey, who's running for re-election, said: "We must learn from our history. And we don't need folks in Washington or out of state liberals telling us what to do in Alabama."

Georgia gubernatorial candidate and former state Rep. Stacey Abrams told CNN, "Confederate monuments have nothing to do with our American history except treason and domestic terrorism."

Memphis Mayor Jim Strickland said in a statement, "While we would have appreciated the additional funding, the ongoing planning for the joint city-county bicentennial will continue unchanged."