In Review: A Satellite View Of The Year's Biggest Moments 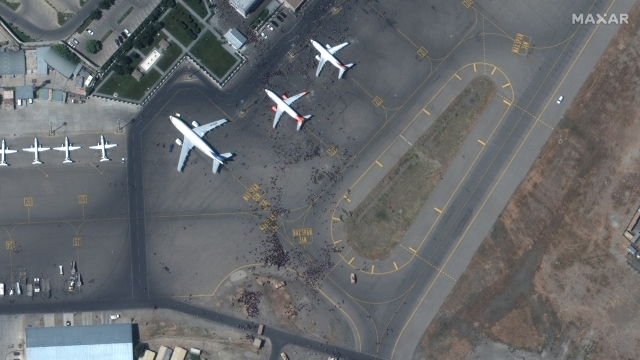 SMS
In Review: A Satellite View Of The Year's Biggest Moments
By Jason Bellini
By Jason Bellini
December 29, 2021
From the availability of COVID-19 vaccines to wildfires and flooding, 2021 was a jam-packed twelve months.
SHOW TRANSCRIPT

It's a view of our changing world from on high — satellite images capturing some of 2021's most significant befores, afters and durings.

There were fireworks in January during celebrations for Joe Biden's inauguration as America's 46th president.

There were lines of cars snaking around Dodger stadium at one of the mass vaccinations sites created in cities around the U.S. After, in February, COVID vaccines finally became available. Ten months later, more than 200 million Americans — more than 60 percent of the population — have been vaccinated.

There was a container ship run aground in Egypt's Suez Canal, blocking traffic for a week in March. The narrow passage linking Asia and Europe conveys about 12% of global trade. The disruption was a precursor to the global supply chain jam up to come later in the year.

In May, there was a missile strike by Hamas on an Israeli oil storage tank and the remnants of a building in Gaza was leveled in a retaliatory airstrike. More than 1,200 people died in Gaza and 12 people died in Israel before the declaration of a cease fire.

There's a view through the smoke, using shortwave infrared technology, of the Dixie-jumbo wildfire in Idaho in July. It shows some of the more than 46,000 acres burned as well as the active fire line.

Later that month there was the before and after of devastating flooding in Germany where more than 120 people died.

Then, thousands of desperate people flooding the tarmac at Kubal, Afghanistan's International Airport. The Taliban overtook the city in mid August after the U.S. withdrew from it's nearly 20-year war effort.

There was lava weaving through a town in La Palma, Spain after the eruption in September of the Cumbre Vieja volcano.

There was an actual-size mock-up of a U.S. Navy carrier in the Taklamaken Desert of northwest China. Amid rising tensions over Taiwan, the U.S., in November, said China was using this for target practice for its new anti-ship ballistic missile.

Later that month, there were images of another adversary's military. Russian ground forces and equipment assembled near the border with Ukraine. In early December, President Biden warned Russian President Vladimir Putin that an invasion of Ukraine would result in heavy economic and other consequences.

The final month of the year also brought before and after images of the devastation caused by massive tornadoes that killed more than 90 people across five states.

As the world turns, eyes in the sky zoom in to offer a high-resolution view of moments of tragedy, triumph and wonder in 2021.