In Review: 24 Days of Christmas Series 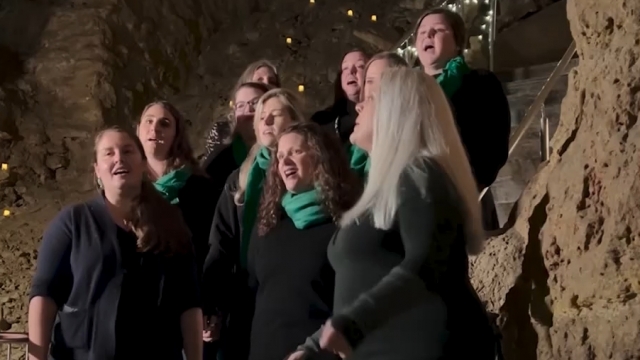 No holiday is complete without carols. An offbeat way to enjoy them is at the Cave of the Mounds in Wisconsin.  It's not your typical concert hall, but rather an acoustic theater created by Mother Nature herself.

"The cave atmosphere amplified everything to be even more beautiful than just any other setting. So it's really awesome. And it put me in  the Christmas holiday spirit," geologist Cameron Batchelor said.

The Greentone Acapella group is back performing their holiday songs after a year off due to COVID. They've been singing carols since 2010.

"It sounds not only beautiful to everybody who gets to be a spectator in the audience, but it feels really beautiful to all of us," director Laura Kruschke said.

No other equipment is necessary. No microphones, monitors or speakers. Kruschke says it's a relief.

"All of that we get to just completely mentally and physically set aside because we get to just be in this amazing acoustical and very beautiful environment."

This cave is more than a million years old. The limestone cave maintains a temperature of 50 degrees year round. It's damp with water dripping from the tops of the cave.

Cave of the Mounds Operations Manager Jan Okeson said " although we get a lot of people in here for a concert, the sounds echoing through the walls, really feels magical to me. "

The concert is a charity fundraising effort. Throughout the years, they've raised $12,000.

And if you're more of the singing type, there's also a sing-along tour.

The staff here in the Cave of the Mounds tells us they're open all year long.

Scuba diving has never been this jolly.

At the Adventure Aquarium in Camden, New Jersey, diving Santa is sharing the Christmas cheer and magic.

Melissa Patterson, the aquarium's Guest Experience and Events Manager, said "it's not everywhere they go and take picture with scuba Santa under water."

Patterson said, "there's over 400 individual corals, so it definitely took a very long time for us to create it. It has 1,540 LED lights, which you'll see in all those little sea stars that are decorating the tree. And then, of course, are 18 tall giant sea star topper on top."

The aquarium is home to 15,000 animals, including the largest collection of sharks in the Northeast. It's the only one in the world to exhibit hippos and one of only six in the U.S. to have little blue penguins.

The aquarium is also an interactive learning experience. There's an exhibit with jellyfish in plastic bags. The idea is to raise awareness about the plastic footprints humans leave in the ocean. Over 7 million tons of plastic end up in the ocean every year. Sea turtles are one of the most affected; they eat jellyfish, and when they see clear plastic bags, they eat them thinking they're food.

The aquarium's mission is to bring families closer together and making memories worth repeating.

"A lot of people didn't have the normal holiday season last year, right? So this is finally a chance for everyone to come out, come together and start redoing those traditions we've had in the past or making new traditions and having new memories," Patterson said.