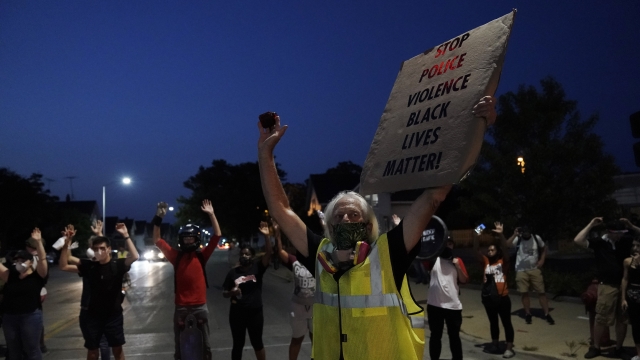 Life in Kenosha, a Wisconsin city of around 100,000 people, has changed since Jacob Blake was shot by police.

Plain moved to Kenosha from Chicago 10 years ago.

"I moved out here for the quietness," Plain said. "So pretty much it's been quiet. Everybody pretty much keeps to themself. It’s been peaceful. So this is my first experience same like Chicago."

"Every night we don't know what's going to happen," Plain said. "... I think it's pretty much people coming down to antagonize the situation. It’s pretty much not the people from Kenosha, people from other surrounding areas, stuff like that. And it's making us feel like we are prisoners in our own home."

Officials say what they've seen in Kenosha is not the norm.

"And I understand their concerns of wanting to guard the businesses and different things like that, but the way they went about it was the wrong way," Plain said.

"What I want the people of Kenosha to know though: We're working hard and we're getting better at this. And we've got more resources coming in," Beth said. "And we are not, like the mayor said too, we're not going to put up with what we saw Monday night. We're not going to."

Now, the people of Kenosha are cleaning up the mess left behind. Community members and artists have come together, painting messages of love and hope.

"We need to find a way we can show the devastation and damage that happened right here is not us," Francisco Loyola, the executive director of Kenosha Creative Space, said. "This is not our community. This is who we are."

"Everyone forgets these are things that are different for us," Kenosha Mayor John Antaramian said. "Kenosha has been a wonderful community and a lot of good things happening in it. This is different and we're going to learn from it but hopefully the learning isn't necessarily the destruction and the death that occurs, but how we rebuild the community and how we create those relationships to make it a better place."