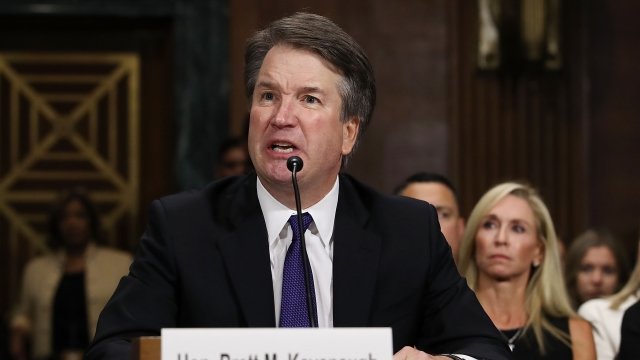 Brett Kavanaugh testified before the Senate Judiciary Committee Thursday on allegations that he sexually assaulted Christine Blasey Ford. In an often combative and emotional session, Kavanaugh repeatedly raised his voice and cried, addressing allegations he says have destroyed his reputation.

"I love teaching law, but thanks to what some of you on this side of the committee have unleashed, I may never be able to teach again," Kavanaugh said.

On several occasions, Kavanaugh accused Democrats in particular of mishandling Ford's allegations and even conspiring against him. Sen. Dianne Feinstein was the first Democrat to question him.

Feinstein asked, "Why aren't you also asking the FBI to investigate these claims?"

"Senator, I'll do whatever the committee wants. I wanted a hearing the day after this allegation came up," Kavanaugh responded. "I wanted to be heard that day."

The Republican senators initially deferred to a hired prosecutor for Kavanaugh's questioning, before taking over the questioning themselves. In one of the most heated moments in the testimony, Sen. Lindsey Graham alleged the entire process of being a partisan sham.

"This is the most unethical sham since I've been in politics, and if you really wanted to know the truth, you sure as hell wouldn't have done what you did to this guy," Graham said.

Kavanaugh maintained his innocence throughout the hearing, responding to several different questions by asserting the other witnesses named in the allegation have said it didn't happen.