In Camel Racing, Robot Jockeys Are The Norm 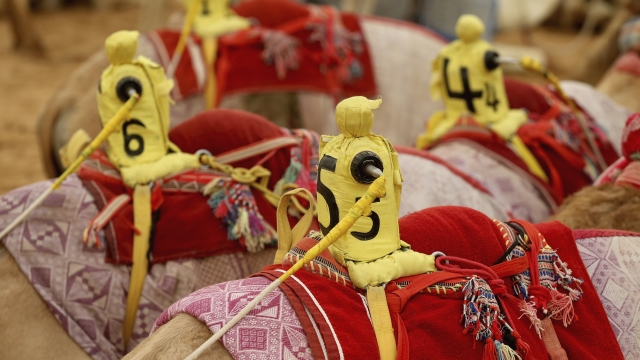 Mechanical riders might sound like something out of the future, but they're actually a solution to a serious human rights issue.

Usually, when you go to the races, you expect to see jockeys atop their valuable mounts. But at camel races in the United Arab Emirates, the riders aren't people. They're robots.

Camel racing is an ancient tradition in the Arab world, but the mechanical jockeys used today have only been around for about a decade or so.

The jockeys weigh about 6 and a half pounds. They come equipped with a walkie-talkie, so the camel can take directions, and a small whip, which is activated by a remote control.

For the camels' trainers, getting the right commands in is a race in itself. SUV's drive alongside the track while trainers punch in orders for the robots from the passenger seat.

And it's not easy to keep pace with the animals. Camels tend to average about 25 miles per hour over the course of a race.

The robots aren't just a clever engineering feat. They're also a solution to a serious human rights problem associated with camel racing.

For decades, camel jockeys were small children who were often trafficked from other countries and were subject to serious abuse, as well as the dangers associated with riding on such a fast animal.

The UAE banned the practice in 2005, and though it wasn't completely eradicated, adding robot jockeys presented a viable alternative for camel owners.

So when owners cash in big prizes after race wins, they'll have little robots to thank — hardly something their ancestors could have predicted.