In Brazil's Amazon, Fires Threaten The Environment And Way Of Life 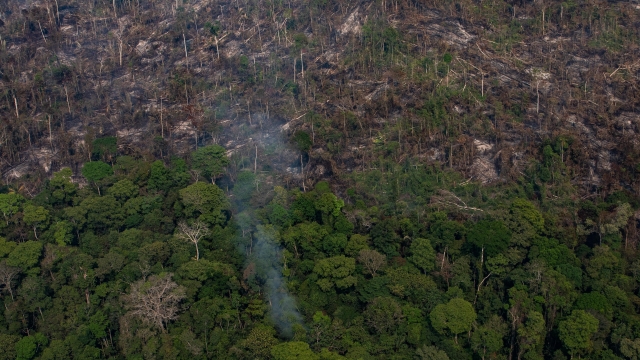 SMS
In Brazil's Amazon, Fires Threaten The Environment And Way Of Life
By Peter Hecht
By Peter Hecht
September 8, 2019
In the forested Acre state, searing fires and the president's development plans stir memories of an environmental martyr for the Amazon.
SHOW TRANSCRIPT

Brazil's rainforest is ablaze in catastrophic fires. They're sparking global outrage over President Jair Bolsonaro's pro-development policies, as well as the practice of setting fires to clear forests for ranching, mining and other projects.

Gomercindo Rodrigues is an attorney and environmental activist in the forested state of Acre, which is now smoldering from fires. And all of this has him thinking about his late friend Chico Mendes, Brazil's most famous environmental martyr. Mendes was murdered in 1988 for challenging another major effort to develop Brazil's Amazon region.

"I think we have a situation today that is returning to the period before the murder of Chico Mendes. It is a very big force of agribusiness, the landlords, the farmers. It destroys a lot."

On Thursday, Bolsonaro announced he was banning the use of fire for deforestation of the Amazon for 60 days. But the right-wing nationalist and former Army captain wants to open up its indigenous lands for development, with plans for roads and dams to make that happen.

A generation ago, Mendes advocated for the sustainable harvesting of rubber, nuts and other forest commodities in the face of a push by Brazil's military government to clear-cut for ranching. Now Rodrigues hopes the fires will trigger a return to sustainable forestry, just as Mendes' death inspired Brazil's environmental movement.

"In fact, the forest is worth a lot more standing than felling it for pasture. A hectare of native forest can generate income in the region where it has nuts, or with oils, resins and other products that we may not even have discovered to this day. One hectare of forest yields far more than one hectare of pasture raising cattle. ... But there is this discourse that the forest is a hindrance, a hindrance to those who only see the quick, immediate profit."

Jesuina Braga, an organic farmer, says fire has traditionally been a very limited tool used for brush clearing for forest production. But she says: "Not today. Today, fire [is used] without conscience."

Txana Sia, a member of the Huni Kuin indigenous community, says the stakes couldn't be higher for the rainforest and its native populations.

"Our people feel lifeless. We depend on the forest and on our land to live. So when we see the forest being cleared by burning the forest, it's like we feel as if a part of us is burning, like our house. Imagine us witnessing our house being burned. That is how painful it is for us right now."

Correction: This story previously incorrectly spelled Gomercindo Rodrigues' name. It has been updated.