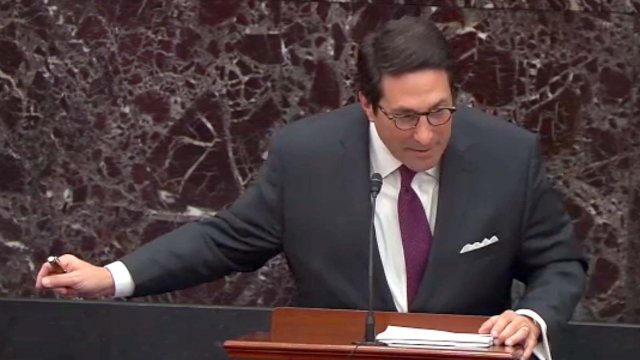 SMS
Impeachment Trial Entering Final Phase After Day 2 Of Questions
By Patrick Terpstra
By Patrick Terpstra
January 30, 2020
Chief Justice John Roberts again refused to read a question because it named the person suspected of being the whistleblower.

Senators spent a second day writing questions for Chief Justice John Roberts to ask aloud to Democratic impeachment managers and the president's defense counsel during the ninth day of the trial in the Senate chamber.The bulk of the inquiries again were designed to make partisan points rather than draw out new information.Roberts refused to read one question from Sen. Rand Paul that referenced the alleged whistleblower whose complaint started the impeachment probe."The presiding officer declines to read the question as submitted," Roberts said from the dais.Paul and other Republicans have said the whistleblower's identity is key to understanding the impeachment probe's origin.The whistleblower's anonymity is protected by law.Republicans also asked about former Vice President Joe Biden and his son, Hunter, who served on the board of a Ukrainian energy company while his father was in office.Democrats trained their questions on President Trump and their accusation he held up military aid to Ukraine for a promise by the country's leadership to investigate the Bidens."We have no evidence to point to the fact that either Biden has anything at all to tell us about the president shaking down a foreign power to help him cheat," said impeachment manager Rep. Val Demings. Still to come is a nail-biting vote in the Senate on whether to hear from new witnesses, including John Bolton.The former national security adviser reportedly has a firsthand account implicating President Trump in the alleged Ukraine scheme."The American people deserve answers, and yes, it is still a good time to call Ambassador Bolton to testify," said impeachment manager Rep. Jason Crow.Trump ally Sen. Lindsey Graham predicted Republicans would block witnesses and acquit the president before his State of the Union speech set for Tuesday."We're not blocking anybody's witnesses," Graham said. "We're just not going to legitimize the House choosing not to call a witness, dump it in our lap."A handful of Republicans could side with Democrats to call witnesses, extending the trial's duration.Senators are preparing for a possible 50-50 draw on the question, potentially leaving it to Roberts to cast a tie-breaking vote.