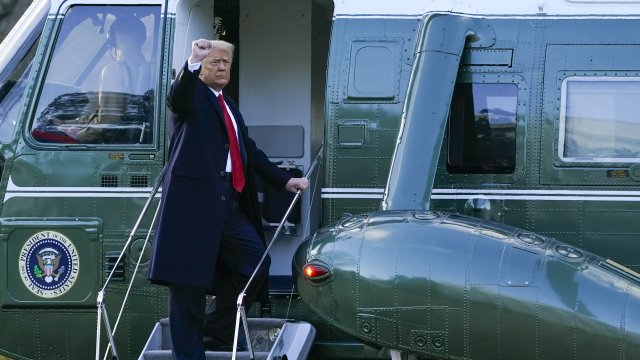 As a private citizen again, Donald Trump loses protections of the presidency to keep him out of legal trouble.

He now confronts the prospect of criminal and civil charges in multiple pending cases.

The acting U.S. attorney for the District of Columbia is reviewing Trump’s actions during the Jan. 6 attack on Congress.

Trump may also come under scrutiny for any efforts to slow U.S. mail during the election, or to delay the transfer of power to President Biden in the weeks after the election.

There’s also the Mueller Russia investigation, where the ex-president could still be prosecuted for obstruction of justice.

Charges also could come from the case against Michael Cohen, Trump’s former fixer who says he made illegal hush money payments to women at Trump’s command.

But future indictments in any of those cases would come from the Biden Justice Department, and the new president, who built a campaign on a message of unity, has seemed less than eager to see his predecessor charged with crimes.

Biden also said the Justice Department should have independence, with any legal action against Trump being the decision of the attorney general after any investigations conclude.

“I am not going to make that individual judgment,” Biden said during the interview.

Other Trump investigations are out of President Biden’s control.

“Me, as a former federal prosecutor, of [places] where would I focus my interest, that would be one of them, because there’s been such robust reporting on the subject,” Khardori said.

And a prosecutor in Georgia may open an inquiry into Trump’s infamous phone call to the secretary of State where he pressured him to overturn the election.

“We won the election, and it’s not fair to take it away from us like this,” the former president is heard saying in the call.

Other cases are possible if new accusations of misconduct surface.

“With Trump out of power, there are going to be a lot more pathways, people, individuals to come forward with accounts of potential wrongdoing,” Khardori said.

Trump has denied all allegations against him, often dismissing them as the work of political enemies and part of “the greatest and most vicious witch hunt in the history of our country.”

He would go into any legal fight with decades of experience defending himself, money to hire top attorneys and history on his side.

No president has ever gone to jail.