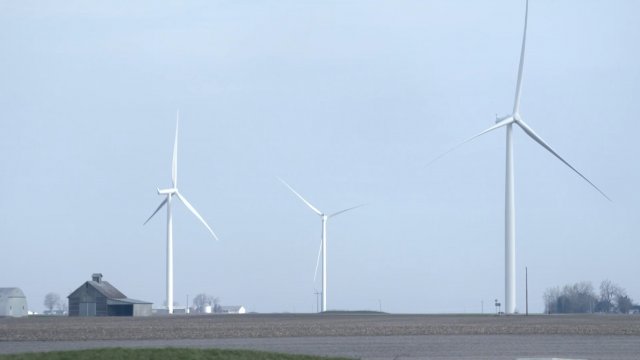 SMS
Illinois Wind Farm Draws Mixed Feelings From Local Farmers
By Cat Sandoval
By Cat Sandoval
April 21, 2022
Alta Farms Wind Project II is set to operate in Illinois this fall, but residents there aren't all on board with the energy option.

The wind blows heavy and strong in Clinton, IL, where new turbines are currently under construction.

The town between Chicago and St. Louis will soon be home to a $345 million wind farm, now called Alta Farms Wind Project II.

Enel Green Power, the Italian company behind the project, says the 50 turbines there are twice as big as previous models, which makes them more efficient at harnessing the wind. They produce twice as much electricity, which means fewer turbines to build.

Evan Carruthers, Enel Green Power's site manager, says he's seen growth in turbine structures and in the business of alternative energy in his more than 20 years in the industry.

"It's the future, definitely," Carruthers said. "We're generating more power, but we're putting a smaller footprint on the actual areas."

Once operational, the company says the project will power 57,000 homes in a year.

In the U.S. last year, wind power generated 9.2% of overall electricity. Fossil fuels still make up the majority of America's energy source, which means there is more room for the industry to expand. This is as the Biden administration pushes and incentivizes clean initiatives across the country.

Texas leads in wind energy but Illinois is in the wind belt.

"In the Midwest, it's been a boon for people who... have land that's windy and can actually lease that land for the wind farms," said Matthew Lackner, professor and Wind Energy Center director at the University of Massachusetts Amherst.

Not only is wind energy cheaper compared to other alternatives, it's an economic incentive for farmers. They can lease their farmlands for 30 years or more and make between $8,000 and $80,000 a year per turbine depending on size. Also, the Nature Conservancy says the flat landscape means the project is less likely to hurt wildlife.

But while there are benefits to wind energy, it's a mixed bag depending on who you ask.

"We're like everybody else," said Tom Martin, a farmer at Martin Grain Farms. "We want clean air. We want our world to be better for our families, our grandkids and everything else. We're no different than anybody else, but we're impacted differently because they're put in the towers all around our homes and our farmsteads."

Martin's family owned their farm in Mount Pulaski, Illinois, for generations — about 30 minutes from Alta Farms. The turbines are working there, and while Martin chose not to lease his land to the same developers, his next door neighbor has.

Some days he sees shadow flickers from the blades chopping up the sunlight, or the sounds can cause issues.

"You'll hear the washing sound," Martin said. "It sounds kind of like a, to me, a jet sitting on the runway, getting ready to take off. Not terribly loud, but it's there and it's always, you know, it's always moving."

Martin worked alongside Enel when he served on an economic advisory committee for his city. He saw a boost of financial investments in his community, like a historical site and schools, but he is conflicted on the prospect.

Martin notes Enel is working with the community to address concerns, as the company says it is limiting shadow flicker hours at the new site.

"My hope is that we can feel good 20, 30 years from now, that technology gets better," Martin said.

The U.S. is the second-largest energy consumer in the world behind China, and as our energy consumption grows, so does the need for alternative energy.

"We have to get our power from somewhere, and there's no invisible sources of electricity," Lackner said. "So to me, I think the relative impacts are much smaller compared to fossil fuels."

The developers say the wind farm will create 10 to 12 full-time local jobs and generate $44 million in property taxes over the next 25 years. Landowners will pick up another $50 million. For Dewitt County, that’s a windfall hard to pass up.