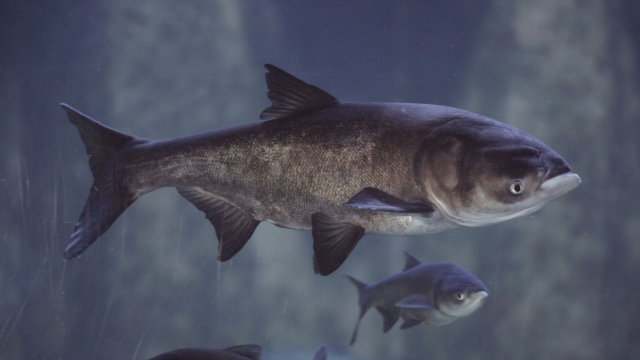 Leaping Asian carp have taken over some Midwestern waterways by storm.

They’re so invasive in the Mississippi watershed, they are making sports like rowing challenging to say the least.

Thrill-seekers in Peoria, Illinois, have even made hunting Asian carp a business. You can either use a sword, or a bow and arrow.

These fish were imported to the U.S. to control algae in contained fish farms, but they escaped into the wild and began overwhelming other aquatic populations.

Hundreds of millions of dollars have been spent trying to contain the invasive fish, and keep them away from the Great Lakes.

Brian Jupiter is a chef and partner for Frontier and Ina Mae Tavern.

Now, Illinois is trying a new trick: a new name for the much-maligned fish.

"The new name for Asian carp is 'Copi.' That's C-O-P-I. It's short for copious, which is exactly what this fish is," Jupiter said.

In a video presentation on Wednesday, Chicago chefs and Illinois officials argued calling the fish “Copi” will help convince people to eat them.

Dirk Fucik is the owner of Dirk's Fish & Gourmet Shop.

"There are challenges we've had to face serving this fish. Most people make a face when we mention the word carp," Fucik says.

If more people start eating Asian carp — or Copi — that could lead to an increase in commercial fishing, and eventually a decrease in their population.

Beverly Kim is the chef and owner of Parachute and Wherewithall.

"It's as mild as tilapia, but I think it has a better texture than tilapia," she said.

The name change trick has worked twice in the past.

And the delicious-sounding orange roughy? It was initially known as slimehead.

The challenges posed by Asian carp are daunting — and a new moniker on its own may not solve everything.

But why not give it a try?