If It Works, Syrian Cease-Fire Could Be A 'Stepping Stone' To Peace 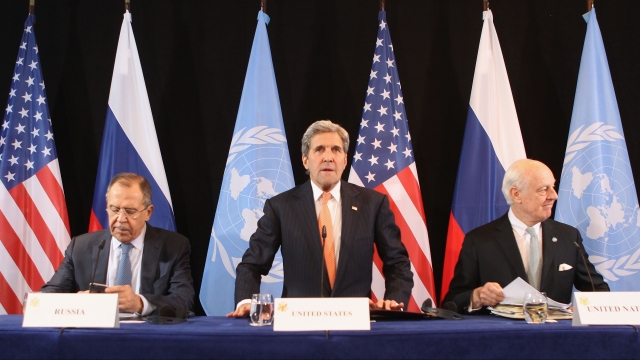 SMS
If It Works, Syrian Cease-Fire Could Be A 'Stepping Stone' To Peace
By Jake Godin
By Jake Godin
February 26, 2016
The cease-fire between the Syrian regime and rebels agreed on by the U.S. and Russia has gone into effect. We asked an expert if it'll actually work.
SHOW TRANSCRIPT

The Syrian government and rebel groups have agreed to a cease-fire organized by the U.S and Russia. But will it work?

"My name is Hassan Hassan. I am a resident fellow with The Tahrir Institute for Middle East Policy, a think tank here in Washington, D.C. I come from eastern Syria near the Iraqi border from a town called Al Bukamal."

Newsy asked an expert if ending the violence, at least temporarily, was really too good to be true.

"The truce is an ambitious project agreed by the U.S. and Russia. But it's a stepping stone toward doing something that might radically change the direction of the conflict in Syria," Hassan said.

Jabhat al-Nusra, Al-Qaeda's Syrian affiliate, was not included in the truce.

"The problem with that is that Russia and the regime will say when they target opposition forces that they are targeting Jabhat al-Nusra," Hassan said.

That means even the rebels who've agreed to the cease-fire may not be safe from airstrikes or barrel bombs.

"What the truce is essentially saying is that the opposition cannot attack the regime and the regime can attack in opposition areas as long as these are Jabhat al-Nusra and other extremist forces," Hassan said.

The Kurds aren't exactly a reassuring entity for the truce either. They've been attacking rebels north of Aleppo, a city in northwest Syria.

"We cannot overstate the tensions between some of the rebels and the Kurds and the perception of the Kurds among people in northern Syria," Hassan said.

It's even possible rebels might switch sides ... to ISIS.

"I think some people might join ISIS rather than the Kurds if they are forced into a choice," Hassan said.

But if the cease-fire works, it could be the first step toward some sort of resolution for the conflict.