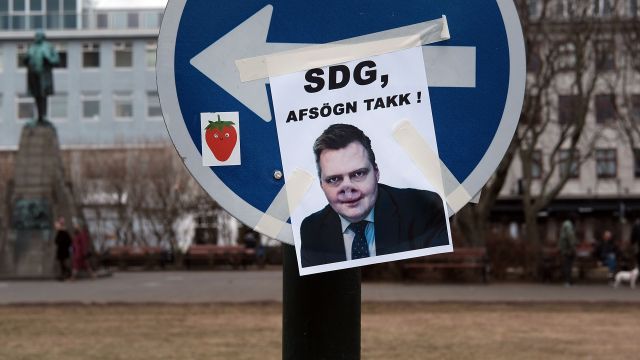 SMS
Icelanders Think Pirates Are Their Best Political Option Right Now
By Matt Picht
By Matt Picht
April 6, 2016
Iceland's Pirate Party currently holds three seats in parliament — but one poll suggests they could get almost half of the votes in a snap election.
SHOW TRANSCRIPT

The resignation of Iceland's prime minister has thrown Iceland into an unexpected political crisis — and the group that stands to gain the most from this upheaval is a bunch of pirates.

Birgitta Jonsdottir is the head of Iceland's Pirate Party, which was founded in 2012. It's part of a political movement incubated on the internet, which supports looser copyright laws, more direct citizen participation in government, individual privacy rights and government transparency.

Iceland's Pirate Party is one of the more successful iterations of the movement; it currently holds three seats in the country's 63-seat version of parliament. Other Pirate Parties around the world have picked up several seats in national governments, and even a few seats in the European Parliament.

But that could be about to change — a recent opinion poll found 43 percent of voters would back the party in an election. That's almost double the amount of support Iceland's current ruling parties received in that poll.

Right now, Iceland's minister for fisheries and agriculture has been nominated to replace the outgoing PM. But the government has called for snap elections in autumn; if the ruling parties don't regain the public's trust, the future of Iceland's government might fall into the hands of the Pirates.