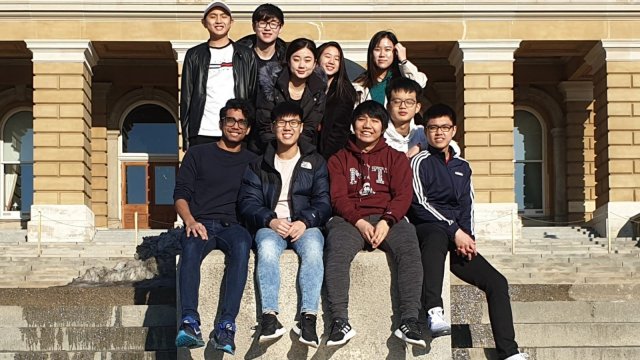 SMS
International Students Will Have To Leave U.S. If Schools Move Online
By Ben Schamisso
By Ben Schamisso
July 7, 2020
ICE says foreign students must leave the U.S. if their universities move entirely online in the fall and if they can't manage a school transfer.
SHOW TRANSCRIPT

Thousands of students across the U.S. are facing an uncertain future after ICE announced international students must leave the country if their universities move entirely online in the fall.

"It's such a hard process to get a visa. It's just a long plan and so much money involved and so bureaucratic. And then you get here and they they're like, 'Oh, we're going to kick you out,'" said Natalia Marques, a Brazilian student at Sonoma State University in Northern California.

"I would be leaving a girl that I'm currently seeing, which sounds trivial, but it comes to your brain. And again, friends and just a social circle and a life that I've cultivated here," said Christian Jackson, a Malaysian student at Drake University in Des Moines, Iowa.

Under the new rule, foreign students will have to depart the U.S. unless part of their course load is taken in person. If that's not possible, ICE says they can try to transfer to other colleges.

For now, international students are scrambling to figure out what to do next.

"I don't know what the situation is like in Malaysia. I don't know if I'll be able to study from home because of time zones," said Jackson.

"It's kind of scary, too, because, I mean, of course Brazil is my home. But at the same time, you know things are not doing good there," said Marques.

Universities have until Aug. 1 to notify the government if they'll restart some or all classes in person.

"I'm just waiting for some sort of announcement, some sort of reassurance that, 'Hey, you guys are OK. You guys, we got you guys,'" said Jackson.

"I have a little hope they're going to try to do something about it, even if, you know, they create some [in-person] classes for us," said Marques.

The new guideline comes amid a debate among colleges about how to safely reopen in the fall now that the coronavirus is gaining steam among young adults in the U.S. The American Council on Education, which represents university presidents, says the new rule is "horrifying" and "provides confusion and complexity rather than certainty and clarity."

"This regulation is going to prevent many students from coming to the United States and getting to experience education in the United States and contribute to this country. But it's also going to pressure a lot of colleges and universities to open up to in-person classes far sooner than might be wise for public health concerns," said Sarah Pierce, a policy analyst at the Migration Policy Institute.

Last year, colleges in the U.S. attracted 1.1 million international students. Losing some of those students could be financially disastrous for universities. Many depend on the tuition revenue of foreign students, who typically pay higher rates than American students.

"It's not cheap, especially if you come from a country that has worse-off currency," said Jackson.

Before the pandemic, international students had to take most of their course load in-person. But ICE created an exemption in the spring after the virus forced campuses to close.

On Monday, ICE decided it was time to mostly get rid of that exemption and resume "carefully balanced protections" against visa fraud.

The agency has notified schools and says it will soon publish a formal rule.