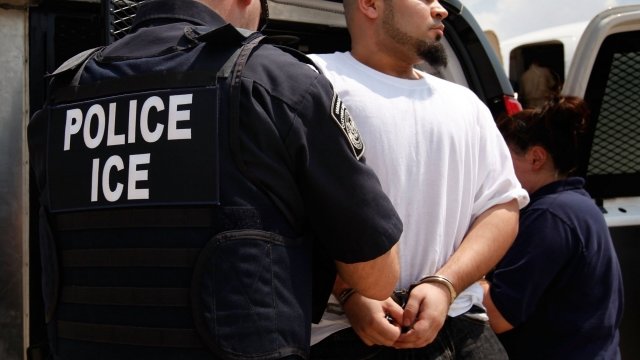 SMS
ICE Arrests 97 Undocumented Workers At Tennessee Meat Processing Plant
By Jake Jones
By Jake Jones
April 7, 2018
A confidential informant told authorities he didn't have to complete paperwork before being hired and was told he didn't need a legal identity.
SHOW TRANSCRIPT

Immigrant rights activists say it was the largest single-workplace raid in a decade. Of those arrested, 54 are reportedly being detained in an undisclosed location.

Authorities suspected the slaughterhouse, Southeastern Provision in Bean Station, Tennessee, was employing undocumented workers after a tip from a bank. The plant's owners had reportedly withdrawn $25 million in cash since 2008.

Local media reports a confidential informant told authorities he wasn't required to complete any paperwork before being hired at the plant and was told he didn't need a legal identity to work there.

The plant's employees reportedly worked with chemicals like bleach without proper protective gear and were not paid overtime wages.

According to IRS forms, the plant only claims to have 44 employees. Authorities estimate the company would have owed $2.5 million more in payroll taxes between 2013 and 2016 if it reported wages accurately.

The news comes as the Trump administration is ramping up its immigration enforcement efforts. President Donald Trump recently ordered the National Guard to help secure the U.S.' border with Mexico.