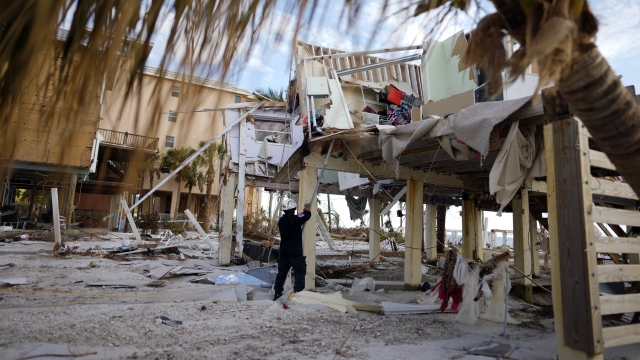 SMS
Hurricane Ian Victims Scramble For Aid As Death Toll Hits 127
By Haley Bull
By Haley Bull
October 7, 2022
More than a week after Ian slammed Florida, the death toll stands at 127 and some victims remain without power, drinkable water or a place to live.

There's a long road to recovery in the wake of Hurricane Ian's wrath.

The owner of Hurricane Tina's says the bar got hit with an 8-to-10-foot storm surge, but despite the damage, the next day they started feeding their community.

"Here's our waterline where it came up to in the bar," Tina Tomasino said. We will rebuild, but like right now we need help."

The roads throughout Fort Myers show devastation to homes and businesses.

"None could have guessed it," said Ruland.

Ruland says this is a tight-knit fishing and restaurant community, and it seems so even more after disaster hit.

But what does the rebuild recovery process look like for Ruland?

"Depends on when and what they let us do. So, the sooner they allow us to do the work that needs to be done the less long-term damage," he said.

State officials say so far, at least 2,000 businesses reported a total of around $300 million in damages.

"There's businesses like this that may have had a lapse in income, there's businesses on Fort Myers Beach that no longer exist, and we want to stand by them and make sure they can get back up and running, some in the short term, some in the long term," said Dane Eagle, secretary of the Florida Department of Economic Opportunity.

"And how many of you lost your businesses? Well, I've directed the Small Business Administration to speed up the processing of low-interest disaster loans that can provide up to $2 million for small businesses and nonprofits and additional money for lost income," the president said.

Meanwhile, a FEMA spokesperson says the agency is fully into recovery mode, with hundreds of disaster survivor assistance teams going door to door to help people.

But will FEMA need more funding for this storm?

"That remains to be seen," said FEMA press secretary Jeremy Edwards. "Right now we're working with the funding that we do have through our Disaster Relief Fund and other funding mechanisms just to meet the immediate needs. But as time goes on, we will address that. A lot of that comes down to what type of requests we're getting in from the counties."

On the ground, crews are checking structures, restoring power and removing debris, more than a week after the hurricane's landfall.

"It looked a lot like when I was in Iraq — there's sand everywhere, there's debris everywhere, they're pulling bodies," said Fort Myers Beach resident Billie Edson.

But even in the midst of losing nearly everything, neighbors are helping neighbors.

"I've run into all my neighbors out here, and my insurance agent was here earlier. It's crazy how many people from the beach itself are out here volunteering," said Edson.

They are still looking ahead at what's to come.

"As soon as that first bar and that first hotel opens up, we're gonna need you down here enjoying the beach again," said Edson.

FEMA says so far more than 200,000 people have applied for assistance, and they've granted more than $75 million in aid. In addition to those teams going door-to-door, there are also now disaster recovery centers set up for people to get more information about aid resources.