As Hurricane Michael Recovery Begins, Thousands Are Without Power 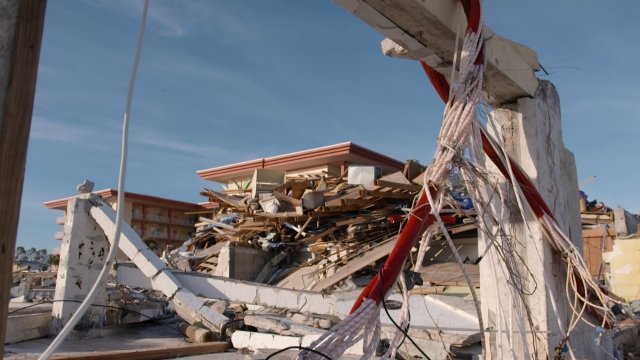 Mexico Beach, Florida, took a direct hit from Hurricane Michael as it made landfall. The road is ripped to shreds, and the buildings along the coast are devastated. There's been a feeling of isolation across the Florida panhandle this week with no cell service, no internet and very little contact with the outside world.

"It was scary. Horrible," said Betty Rich, store owner of Rich's IGA in Wewahitchka, Florida, just a few miles from the coast. "We stayed at our house, and I thought we were gonna be gone. They're saying we may not get electricity for like a month."

Hurricane Michael landed as a category four hurricane — just two miles per hour short of a category five storm. Towns dotting the coast were among the hardest hit. That includes Panama City, Mexico Beach, and Port St. Joe. But severe damage extended across the Florida panhandle and far north. At one point, 400,000 Floridians were without power. By Sunday, that number was at 200,000, many of whom could wait weeks for electricity.

And other essentials, including fuel and water, are still either beyond reach or in high demand   for about 100 miles in all directions from the storm’s point of landfall.

Over the weekend, rescue workers began the lengthy process of scouring through the destruction for survivors and casualties. As residents begin piecing together what's left of their homes, these are the first steps in a long recovery after Hurricane Michael.