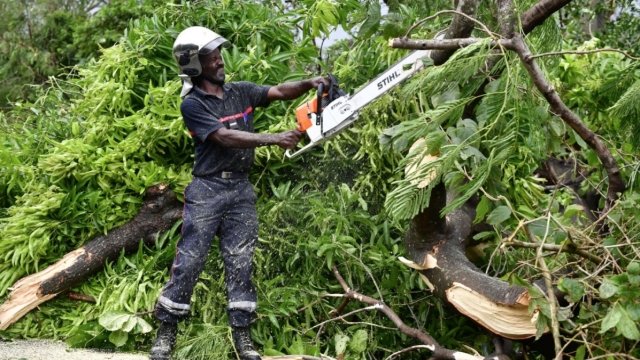 The hurricane made landfall on the islands of Dominica and Guadeloupe late Monday.

Hurricane Maria made landfall in the Caribbean late Monday as a Category 5 storm.

It hit the island of Dominica with 160 mph maximum sustained winds.

On the French island of Guadeloupe, government officials reported "extremely violent" winds and told citizens to stay inside.

Maria's path is similar to Hurricane Irma's, but Dominica and Guadeloupe avoided a direct hit from Irma earlier this month. Overnight Tuesday, Maria is expected to make landfall again on the Virgin Islands and Puerto Rico — areas that are still recovering from Irma.

Hurricanes Irma and Harvey are tumultuous, but projections for the rest of this hurricane season suggest it could get worse.

Maria's strength diminished slightly to a Category 4 storm after making landfall, but meteorologists increased it back to a Category 5 on Tuesday morning.

The National Oceanic and Atmospheric Administration predicted a more active than normal hurricane season this year. Still, this is the first time since 2007 that two Category 5 hurricanes have formed in the Atlantic in the same season.