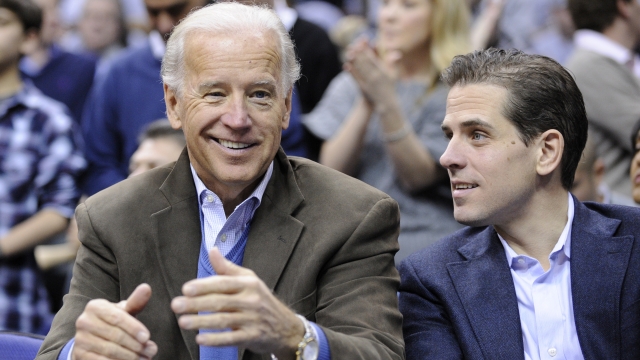 Former members of the CIA are calling it a “laptop operation” — what looks like another Russian influence campaign before the presidential election.

It’s a tangled tale of a laptop allegedly belonging to Joe Biden’s son — full of holes and unanswered questions — but one that the president’s supporters believe could be his political salvation.

"Today we learned from newly released emails, and I want to thank the New York Post for showing real bravery -- that Joe Biden has been blatantly lying," President Trump said days ago.

Media outlets, including Fox News, haven’t been able to confirm the story about Hunter Biden’s activities in Ukraine — starting with how the laptop ended up in the hands of a Trump-supporting, legally blind, computer repair shop owner in Delaware.

As the president pushes for Attorney General Bill Barr to investigate the alleged revelations former members of the CIA are calling it a “laptop operation” — what looks like another Russian influence campaign before the presidential election.

"I think it's fantastically suspicious."

Newsy spoke with Marc Polymeropoulos, the former head of the clandestine operations for Russia and Ukraine between 2017 and 2019.

"The Russian intelligence services' clear goal, as assessed by the intelligence community is to denigrate former Vice President Biden, in effect, supporting President Trump. So there is no doubt the laptop operation fits that bill,"  Polymeropoulos says.

"It's very unclear how the laptop ended up at this shop in Delaware... The owner of the shop who's changed his story several times... And the owner of the shop happens to know Rudy Giuliani's lawyer and calls him and gives him this information," says Alex Finley, a former CIA officer in Europe and West Africa.

They say the involvement by the president’s personal lawyer is another red flag. Because in trying to dig up dirt on the Bidens work in Ukraine, Giuliani met with Andrii Derkach, a Ukrainian who was later sanctioned by the U.S. government for being “an active Russian agent for over a decade.”

According to The Washington Post, the intelligence community believed Giuliani was being targeted by a Russian intelligence influence operation.

"Sometimes even just a whisper in somebody's ear, 'Hey, it would be a good idea if this information can get out.' And then they could come up with their own method for how they want to get it out. They may not know that they're being tasked," Finley says.

"It's the same actors involved. There was a consistency with the main players being Rudy Giuliani and Andrii Derkach," she says.

Both incidents also brought family members into the fray.

"That they're using this as psychological warfare means not just disinformation, but to really try to get under Vice President Biden's skin using his own children," Chalupa says.

The nation’s spy chief says the FBI is investigating, and the intelligence community hasn’t found ties to a Russian disinformation campaign.

"Let me be clear, the intelligence community doesn’t believe that because there is no intelligence that supports that," said Director of National Intelligence John Ratcliffe.

But some current and former officers aren’t convinced.

"In the last two weeks, yes, that's true. The way the intelligence business goes is that we might collect information months, weeks, years later," says Polymeropoulos.