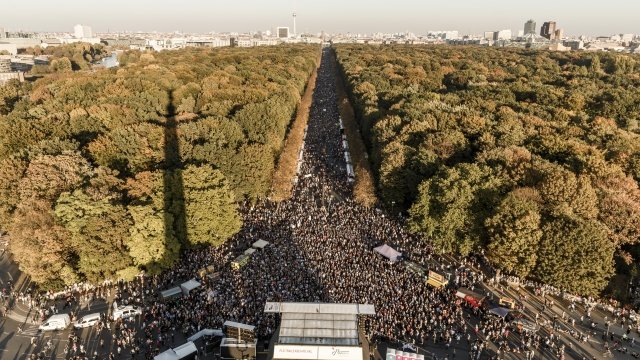 By Sebastián Martínez Valdivia
October 14, 2018
Protesters took a stand against anti-immigrant sentiment that has boosted far-right populist and nationalist groups in their country.
SHOW TRANSCRIPT

Hundreds of thousands of people filled the streets of Berlin Saturday to protest against racism and rising anti-immigrant sentiment in the country.

While organizers reportedly expected some 40,000 people to attend, outlets are reporting as many as 240,000 actually turned out.

A group called #Unteilbar — or "indivisible" — organized the rally. On the group's website, it says it's concerned about attacks on human rights and religious freedom, and that it aims to stand against racism, sexism and nationalism, among other things.

The protest comes at a time when resentment against refugees and migrants in the country has helped the far-right party Alternative for Germany become the largest opposition party in the country and weakened Chancellor Angela Merkel's hold on power.

On Sunday, Bavarians headed to the polls in a regional election that could further jeopardize Merkel's position, with both anti- and pro-immigrant parties expected to make gains on the establishment party there.