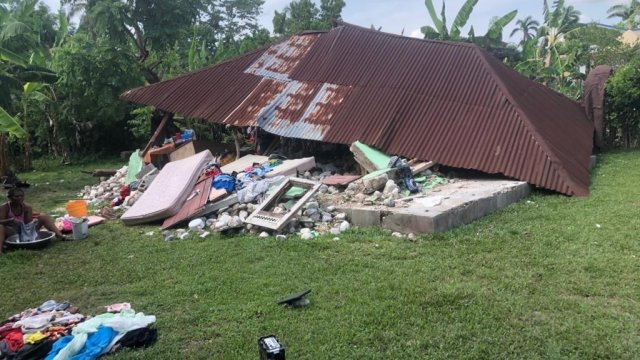 A 7.2 magnitude earthquake followed by a tropical storm left more hurt and more damage in a country all too familiar with disaster. Weeks later, people are coming together to help communities in southern Haiti that remain in need.

"Desperation would be the word I would associate with it," said Jean Wesly Alcin of recovery efforts. "Honestly I don't see any recovery. There are people that are still waiting for water, like basic needs."

Alcin said he grew up in an orphanage in Haiti, before studying in the United States and returning to work for a ministry in Les Cayes.

"That's the first time in my life I thought I could die," said Jean Wesly Alcin.

He said his home was okay, but as he drove through the streets following the earthquake he saw the aftermath firsthand.

"The houses that I used to see, a home, they are crumbled in the ground, people are crying, the vehicle that we own we had to borrow from people to go take some of the neighbors to the hospital," Alcin said. "I have a friend of mine who's one of the teachers, he was talking on the phone with his sister who were trapped under the rubble."

The immediate response included looking for those lost and helping those hurt. In the weeks since, organizations are working to deliver humanitarian aid.

"As acute emergency medical needs have waned over the past two weeks, we are now focusing on delivering lifesaving aid, including medical equipment and supplies, to support health facilities and humanitarian organizations working in affected areas. We continue to have medical evacuation capabilities ready, if needed," stated a USAID spokesperson.

"And what we really want to see happening is that the purchases, whether of rebuilding supplies or of food, for those purchases to been done locally," said USAID Administrator Samantha Power.

A focus on working with local organizations.

"This is a trend we're seeing worldwide that we very much welcome, having more local partners and local actors responding to disasters. At the end of the day Haitians know better what the needs of Haiti and Haitian people are," said Christophe Illemassene, the deputy team leader of the U.N. Disaster and Assessment Coordination Team in Haiti. "So whenever we can and we have access to local organizations we definitely work with them."

The United Nations said there are 650,000 in need as the agency launched an appeal for $187 million.

"Now we're really focusing our attention on reaching areas further in mountainous areas, not always accessible by roads, and to do so we are working very closely, in fact under the leadership of the Haitian Civil Protection and the support of the U.S. through their military air assets to try to reach as many of those remote areas," said Illemassene.

Needs include food and medical attention. An immediate need is shelter, especially during rainy season.

"Most of those people in those communities are sleeping under trees because of the rain," said MarieGuerda Nicolas, Ph.D.

Nicolas is the co-found of Ayiti Community Trust and a professor at the University of Miami. Nicolas' photos show crumbled homes, cracks in the road, a destroyed school and people waiting for aid.

"In addition to the aid that's coming in but I should also say the local organizations here have really also stepped up to really support the rural areas," Nicolas said.

Nicolas said she's visited about 18 rural communities since the earthquake struck, noting the importance of listening to people on what they need.

The needs are now, and long term.

"The next disaster is coming so let's build something that's going to be there for the long term," said Nicolas.

"Everything that happens we talk about it for like a month then the problem, the root of the problem we never get to," said Alcin.