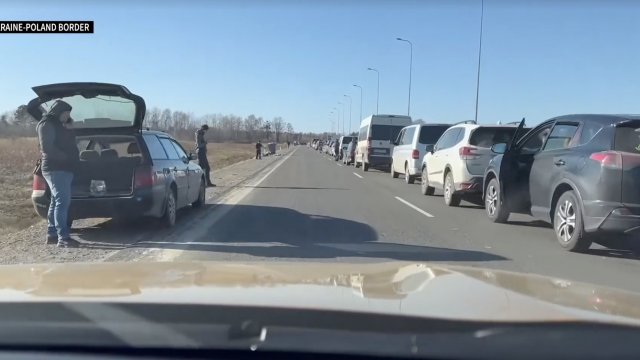 The scale of the humanitarian disaster in Ukraine — predicted in the run-up to war — is now becoming evident at the western border with Poland.

With the airspace closed and with Russian forces in the north, south and east, this is the only way out for so many.

We witnessed a traffic jam that could take hours, if not days to get through.

In the front line cities for those who are staying, life is increasingly difficult.

There are breadlines in Kharkiv, Ukraine’s second largest city, which is now an active war zone.

In Mariupol in the south - there are reports that gas is running out and cash machines are running empty.

And yet across Ukraine many continue to go about their daily lives.

That means long lines at the ATM and at the pharmacy, and crowded and canceled trains.

And the exodus from east to west — from the capital to the relative safety of western Ukraine — is now jamming the highways. Some crossed the border on foot.

In Poland, those lucky and patient enough to make it through the crush of cars on the other side are so far getting a friendly reception.

But the longer the war goes on and the more people are displaced - the greater the pressure on Poland and the rest of Europe to try manage what could be the worst humanitarian crisis to hit the continent in decades.

There are now thousands of U.S. Troops in eastern Poland. They’re under strict orders not to get involved in the war across the border — but they will be on the front line of any refugee crisis the war may cause.