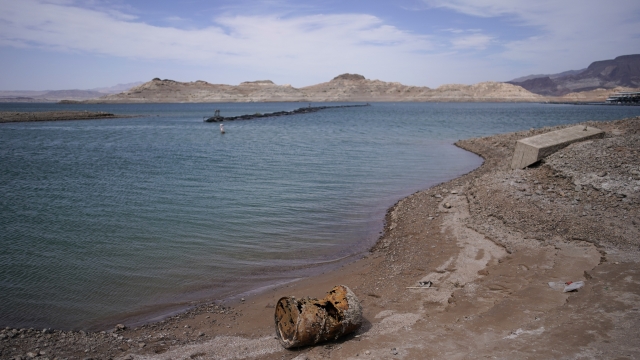 As Lake Mead on the Arizona-Nevada border becomes more shallow, the mystery is deepening.

In the last few days, the receding waters have exposed the remains of two people long hidden.

One was discovered on May 1 in a rusted-out barrel. Las Vegas homicide detectives say the victim died of a gunshot wound. And based on their clothing and shoes, likely back in the 1970s or 80s.

Then, last Saturday, two women spotted bones and a human skull sticking out of a sandbar. What's not a mystery is why it's happening now.

"If the water level had not receded, we would never have found the person in the lake," Las Vegas Metropolitan Police Department Lt. Ray Spencer said.

Thanks to a decades-long drought, Lake Mead is shrinking, exposing areas once underwater. The reservoir that 40 million people in six states depend on, is now only about 30 percent full.

The water level has dropped more than 150 feet in about the last 20 years.  And it's left a ring around Lake Mead, kind of like a ring around your bathtub.

Lake Mead is only about a half-hour from Vegas, fueling speculation the remains might belong to victims of casino mobsters.

"It's weird," Michelle Oakley said. "You don't know what is there and as water levels are dropping, weird things are being discovered."

Lake Mead, formed by the Hoover Dam, has been around for nearly a century. The National Park Service says, potentially, there's lots of stuff waiting to be discovered.

"There have been a number of plane crashes that have taken place," he said. "This area was inhabited for thousands of years by Native American people who called this home. We expect, fully, as lake levels drop, there will be artifacts that are hundreds or thousands of years old."