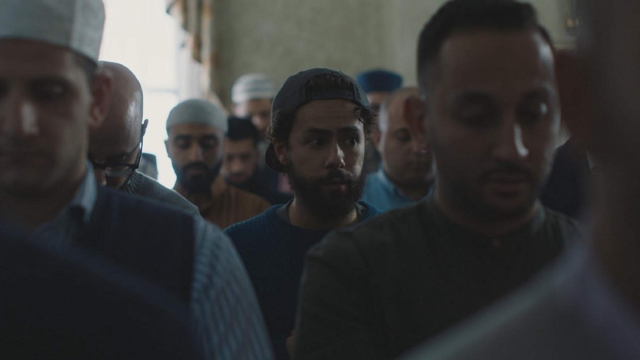 "You can't just walk up to a Muslim girl and like, start spitting game or something. What am I supposed to say? Like, 'Hey, can I get your father's number?'"

"We opened the pilot of my show with the scene of my mother and I in the car outside of the mosque. But when we first shot the pilot, we tested it just opening up at the mosque, and you're in the mosque for the first maybe seven minutes. And in those seven minutes, the test audience thought it was a show about terrorism.

"That kind of just gives you an idea of where people's heads are at with this place and this space. And a big goal in this show was re-framing that and turning it into a place where people go for a sense of community, where they go to worship and to talk about their problems and figure out their life."

Ramy Youssef is the star and creator of Hulu's original comedy "Ramy" — which is the "first scripted series centered on Muslim American life."

Based loosely off Youssef's life, the show delves into the common struggles of dating, job hunting and family. It features nuanced conversations about cultural identity and faith, and it subverts Hollywood's misrepresentations of Muslim worship.

"In the post-9/11 period, you see prayer by Muslims inside and outside of mosques as communicating the characters' extremist views. If you see them praying, especially if you see them use the phrase 'Allahu Akbar,' it's usually followed by a bomb. It's usually followed by some sort of terrorist act. And it's supposed to make the connection to the viewer that prayer and Muslim religiosity is supposed to be feared."

This scene, which depicts a group public prayer, is from the show's episode about Ramadan.

"The basis of that scene really is just my real-life experience of praying in public places with a group. ... It's really this thing that I love about our faith, where you can pray anywhere, you know, you can be Muslim and never walk into a mosque your whole life. Anywhere you are, you can make that connection. And so it's really exciting to show that on screen."

These depictions of Muslim American life and worship have led outlets to call the show "quietly revolutionary" and "profound." That's because Muslim worship in "Ramy" does more than offer a cultural backdrop; instead, prayer is essential to the show's themes of faith and cultural identity as a whole. And unlike past pieces of media like "Master of None" or "The Big Sick," Youssef doesn't portray Islam as a burden.

Some critics from within the Muslim community have still chastised "Ramy" for not being representative enough. But Youssef says it wasn't his goal to "provide a narrative for all."

"I think being publicly devout is a very tricky thing, you know, and for me, it was something I really struggled with, because prayer is a very private act, you know, it's something that's between you and God. And so publicizing it comes with a lot of messy feelings, right?

"It really boiled down to, 'Would I be doing more harm or more good by showing it?' And it felt, ultimately, after thinking on it and praying on it, that showing it would be of a lot more value, because again, you don't see it outside of the context of these, you know, really kind of heinous acts. And even the word 'Allahu Akbar,' which is simply just 'God is great,' is tied to all these vicious things. And so to see characters do that as they navigate their personal lives, their sex lives, their work ambitions, while I'm going to prayer to help, you know, get clarity on that felt like it would be really crucial for people to see."