How Women Impacted The Bangladeshi Student Movement For Safe Roads 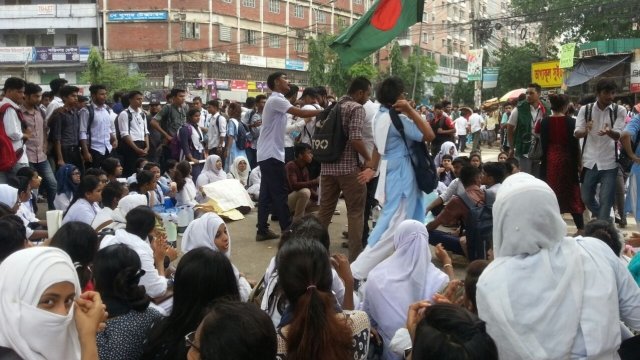 The student-led movement for safer roads in Bangladesh has shifted from on-the-ground demonstrations to students finding new ways to stay engaged. But for some, the protests were symbolic of something larger: women's equity in this fight.

"As a woman in Bangladesh, I constantly feel like I'm a threat because I can be molested at any point in time, because it's an extremely misogynist and sexist environment that we're living in. … Women are constantly demeaned in our society whenever we voice our opinions, but in this case, we were seen as equals and we were treated as equals," an anonymous student from Dhaka said. The student we talked to asked to have her identity protected.

The movement in Bangladesh started after two students were hit and killed by a bus. Initial peaceful protests in the beginning of August turned violent as officials tried to take control. 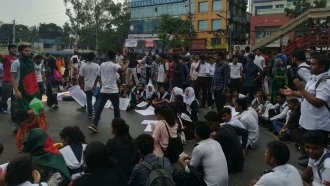 Why Students In Bangladesh Are Enforcing Traffic Safety Rules

"Regardless of what the violence is at stake or what repercussions they have to face, that women can be fearless. I think that was one of the most important [things] to me in this protest, that women were in the front lines, women were taking a beat down," the student said.

That crackdown led to female students and journalists saying they experienced gender-based violence including kidnapping, rape and sexual harassment from members of a pro-government group called the Bangladesh Chhatra League. BCL leaders dismissed the allegations, saying they were "absolutely fabricated."

"The fact that when we were abused or molested, we always have to come up with proof. [The BCL] are the ones, just by letting a blanket statement out there, are believed by the common people, but we're the ones who are being affected. And whenever we're going to speak up and talk about the fact that the things did happen, people are asking for evidence or the fact that, 'Oh, if that really happened, why don't you have photographs, or why don't you have recordings or video?' So it's really upsetting," the student said.

Bangladesh is still a conservative, patriarchal society with widespread violence against women. But the student we talked to hopes women protesters' resolve will help shake up traditional thinking.

"That sort of fearless example is something that we gravely needed in our country. And the perceptions that individuals had in cornering a woman's role in the society, I think that has been broken down to a great extent. … It has broken down perceptions for different generations, like for kids of our age to parents, to really elderly people who have a completely different had a completely different lifestyle and beliefs when it comes to women empowerment," the student said.