How Will European Countries Deal With Refugee Influx Long-Term? 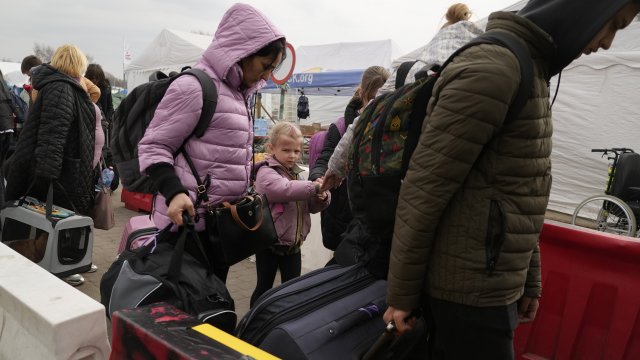 SMS
How Will European Countries Deal With Refugee Influx Long-Term?
By Luke Hanrahan
By Luke Hanrahan
March 29, 2022
In this time of need for Ukraine, the country's neighbors have dropped their anti-refugee approaches and welcomed millions of refugees in.

Close to 4 million Ukrainians are thought to have crossed into the EU since the war with Russia began.

It’s the biggest refugee crisis since the end of World War II, and it’s forcing European countries to act.

Vlada Dymytrenko is one of those who has made the journey from Kyiv — a 16-year-old who traveled on her own through four countries. She was eventually taken in by her aunt who lives in the small English countryside town of Eton.

Dymytrenko says that while she is now safe, she can’t stop worrying about the rest of her family. Her brother and father are helping the war effort, and her mother has stayed to support them.

In Europe, there is no shortage of passionate support for Ukrainians, but there are still real questions surrounding where those who have left and those who are likely to leave will end up.

"The German chancellor, Olaf Schulz, describes that Poland, Ukraine’s immediate neighbors, and Germany have taken in millions of people, but now other western countries need to show solidarity to host refugees entering the EU with no clue as to where they’re going next."

Most refugees have arrived in smaller, poorer European countries. Poland has taken in an estimated 2 million; Ukraine's other EU neighbors — Romania, Slovakia and Hungary — have also seen high arrivals of Ukrainian refugees.

Germany says it has registered more than 270,000 Ukrainian refugees, compared with some 30,000 who have entered France, the EU's second-biggest member.

Spain has taken 25,000 people, while the much smaller Austria and Lithuania have received 35,000 each. Some 13,500 have filed documents in Ireland, and the Czech Republic has received 300,000 Ukrainians, almost 3% of its population.

The EU has collectively agreed to provide a limited form of sanctuary for people arriving in Europe, allowing refugees from Ukraine to remain for at least three years and, in some cases, rehousing refugees and sending children to school.

But the question is — what’s the longer term solution to managing the mass flow of new arrivals?

“It's really important that European countries and Europe’s allies — the U.K., the U.S. — are fully coordinated in their strategy of accepting refugees and integrating those refugees in society," said Dan Sleat, head of research at the Tony Blair Institute. "It doesn’t make any sense that Poland and other countries closer to Ukraine are overburdened, whereas we are being stricter with our numbers."

There will be no obligatory quotas of refugees to be hosted per country, but larger, richer countries are likely to have to step up to the plate to avoid catastrophe in poorer eastern European countries that are already struggling to cope.