How We Got Here: A Brexit Timeline 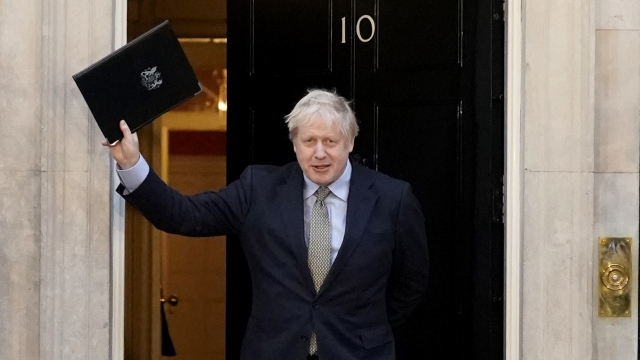 Brexit is, to put it lightly, messy. So let's rewind and break down exactly how we got to this point.

We're taking it all the way back in 2013 when David Cameron was the prime minister of the United Kingdom. He made a promise to voters that if his Conservative Party won the 2015 general election, he would call for a referendum on Britain's membership with the European Union. So when his party won the majority, Cameron made good on his promise.

In June 2016, the U.K. held a referendum on whether to leave the European Union. In a devastating blow to Cameron, who had campaigned vigorously for the U.K. to remain in the EU, over 52% of voters chose to leave the bloc. Cameron almost immediately announced he'd step down.

The next month, Theresa May took over as prime minister. It took another nine months for May to take the first major step in making Brexit official. And that was In March 2017, when May sent a letter to the European Council triggering Article 50 of the Lisbon Treaty and giving the EU and U.K. two years to negotiate an exit deal. The countdown to March 29, 2019 was on.

So Brexit talks for phase one, settling the terms of the U.K.'s departure, officially kicked off in June. Negotiations lasted six months, and during that time the two sides decided on the so-called "divorce" bill, the rights of EU citizens in the post-Brexit U.K. and what to do about the border with Northern Ireland.

Up next was phase two: figuring out the terms of the relationship between the U.K. and the EU after the divorce is finalized. The EU and U.K. negotiated until July 2018 and settled on the controversial "backstop" agreement, which would keep the U.K. aligned with the EU's customs rules until the two sides resolved the issues on the Irish border.

That's also right around the same time British Foreign Minister Boris Johnson and Brexit Secretary David Davis resigned. But Johnson would find himself back in the middle of Brexit soon enough.

Fast forward to January 2019: Over the course of the next three months, Parliament rejected May's Brexit deal three times, even though the EU signed off on it. By the third time Parliament rejected her proposal, the EU already granted a two-week extension to April 12 to hammer out a deal.

But that didn't happen. Instead, the U.K. asked for a second extension, and the EU obliged, giving them until Oct. 31.

In May, after failing to gain support from Parliament, Theresa May tearfully announced her resignation. And in July, Britain voted Boris Johnson in. Since day one in office, Johnson has said the U.K. will leave the EU by the Oct. 31 deadline, with or without a deal in place.

But Johnson's tenure got off to a rough start. In September, after failing to secure support to hold an early general election, he announced he was shutting down Parliament for close to a month. That move was deemed illegal, and Parliament was back in session a few days later. But on Oct. 8, the queen approved a second suspension of Parliament that last until Oct. 14.

Johnson then begrudgingly sent a letter to the EU requesting yet another extension. But he also sent a second letter explaining that he actually didn't want an extension, and that the U.K. is leaving the EU one way or another.

The EU approved the extension, pushing the date to Jan. 31, 2020. In December, Johnson's Conservative Party won a majority in Parliament, which drastically improved the odds that he could meet the new deadline. With that, the countdown to Brexit is on.