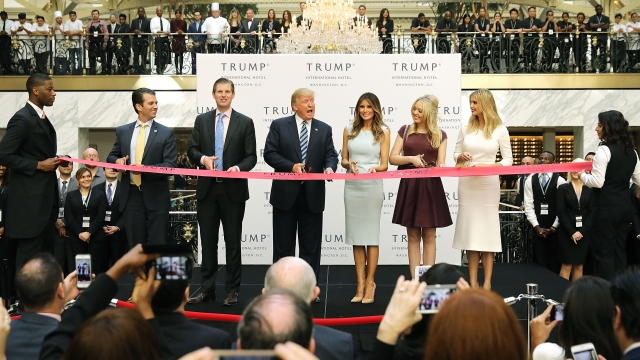 SMS
How Trump Could Get Rid Of His Business Conflicts Of Interest
By Kate Grumke
By Kate Grumke
January 4, 2017
Trump will have to take some big steps to appease his critics.
SHOW TRANSCRIPT

Ethics experts say Donald Trump needs to take some big steps to make clear that he's working toward the best for the country, not the best for his personal business.

Luckily, the Office of Government Ethics has some recommendations for him.

The OGE told Trump he needs to completely divest. That means he would liquidate his stake in his company. Ethics experts say Trump should then put the profits in a completely blind trust run by someone who is not a family member.

That way, he won't know how his decisions would affect his personal wealth.

Trump also needs to make sure he's not talking about the business with his kids, who he said will take over the company. He could do that with the help of the White House Counsel or the Department of Justice's Office of Legal Counsel. And his kids can't be involved in government policy or meetings. So far, they've mixed politics with personal business.

The OGE's recommendations to presidents aren't usually public, but we know this because the office tweeted about it and released documents laying out what it thinks Trump should do.

If Trump doesn't completely divest, he'll be ignoring the OGE's guidelines. Every other modern president has followed them.