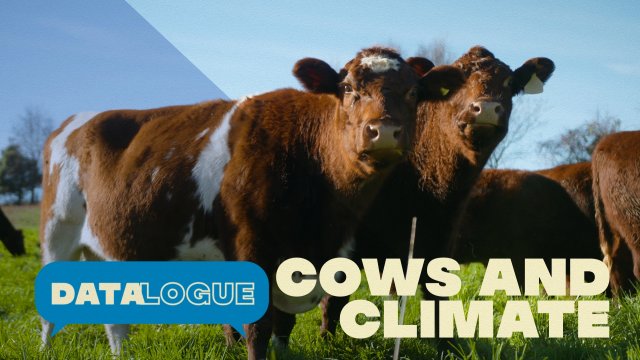 When you think about the things that contribute greenhouse gases emissions, one source is often overlooked: our food.

Agriculture accounts for a quarter of emissions worldwide every year and the biggest single contributor within that is livestock.

Just 100 grams of beef protein, which is about the size of a single quarter pounder, contributes the equivalent of 50 kilograms of carbon dioxide emissions,  the same amount released by a person driving 126 miles in a car.

With human populations and overall wealth rising, global demand for meat continues to grow. That's why farmers and scientists alike are looking for new ways to not only reduce the impact of cows on climate but to reverse the damage they have done.

And one solution with huge potential to do reduce livestock's carbon footprint starts with how the cows are raised through a land management practice called adaptive multi-paddock grazing, or AMP grazing for short.

It's a type of grazing that farmer Michael Heller has been using for more than 30 years at Clagett Farm just outside of Washington, D.C., using electric fences to move and contain his cows on small areas of land for short amounts of time.

"I've got 60 paddocks for these cows and that means I can rest the fields for up to 60 days, which is ideal," Heller said while giving Newsy a tour of his farm where he raises grass fed beef. By allowing fields to rest, Heller said grasses can regenerate and store carbon in the pasture soil.

"If there were no cows here, it would be growing up in weeds and it would not be nearly as effective at producing biomass. And biomass is what we need to produce because that's storing the carbon and sending it down to the roots where it then gets stored in the soil."

In the past, many researchers have often concluded that grass fed beef is worse for climate because cows that eat grass tend to produce more methane than those that eat grains and are raised on feedlots.

But improvements in soil health can dramatically change what the carbon footprint of cows looks like. 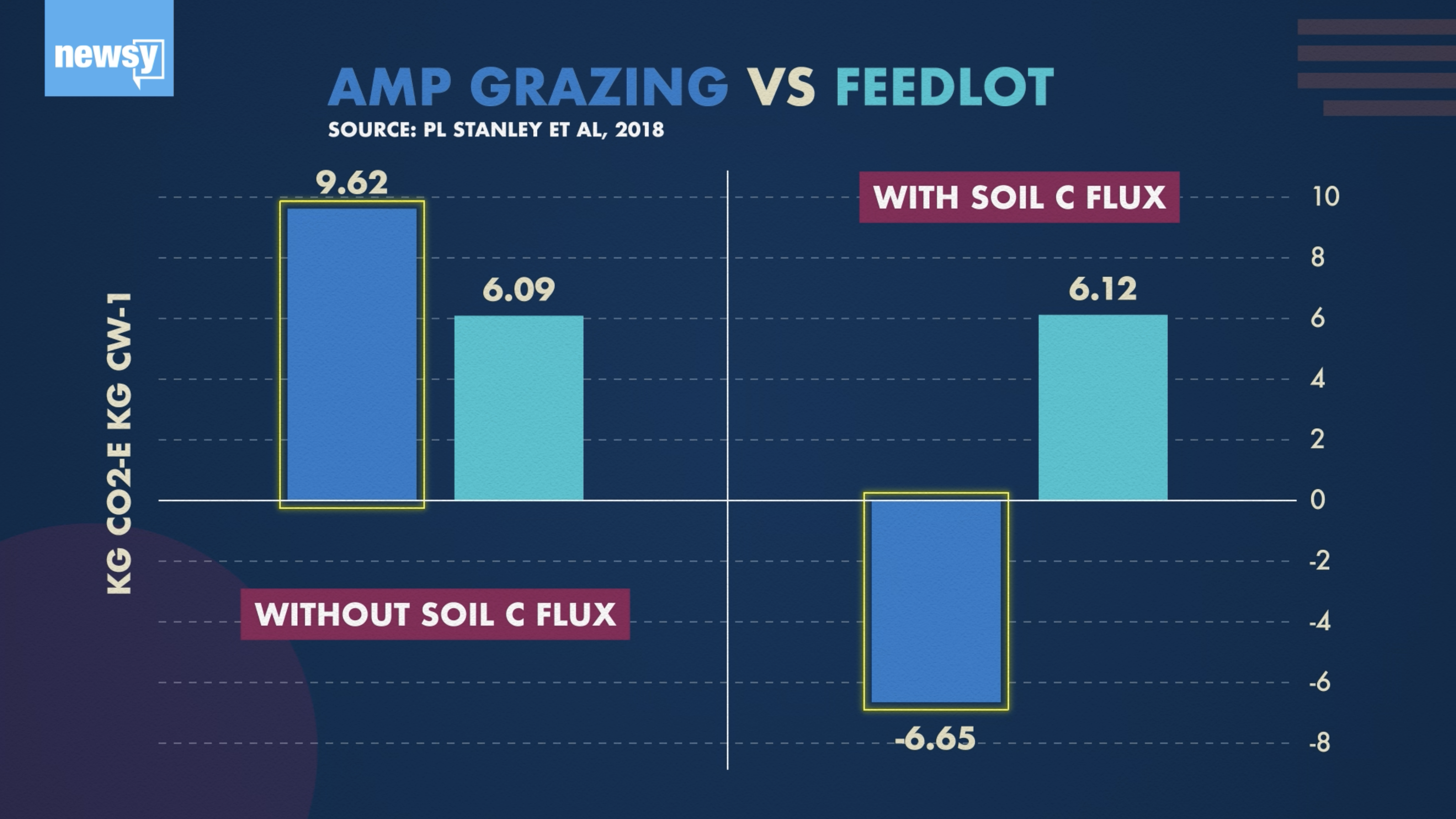 Researchers at Michigan State University who observed cows raised with AMP grazing found that soil carbon increased by 3.59 metric tonnes per hectare per year. It was enough carbon sequestered to offset other emissions and suggests that AMP grazing can act as a net carbon sink, at least in the short term.

When researchers modeled different greenhouse gas scenarios in North America, they found that if 50% of ranchers switched to AMP grazing, it would have far greater impact on emissions than if ranchers reduced the number of animals by 50% but continued other land management practices like feedlot-based systems. 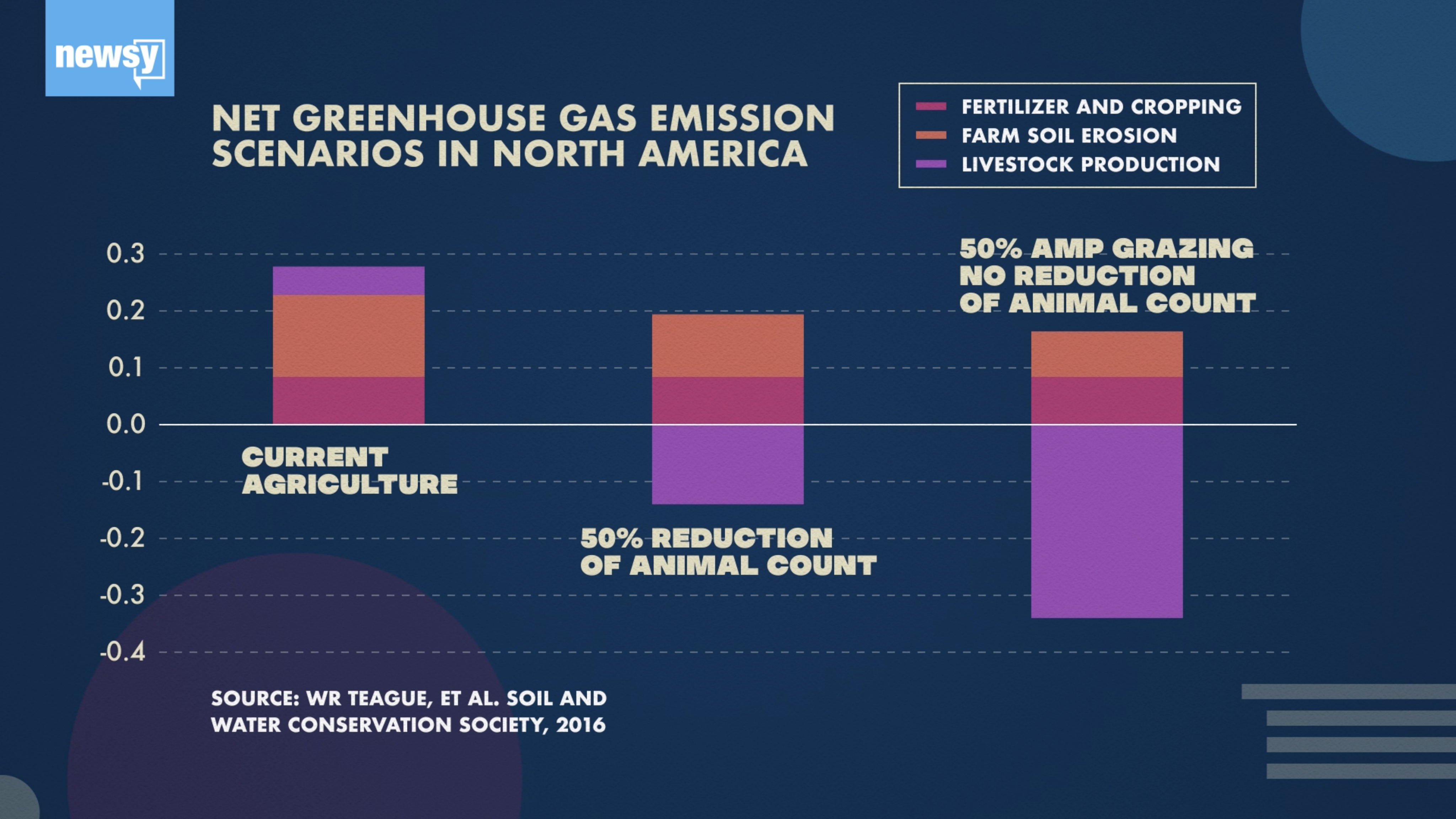 While studies like these are very promising, there are still lots of unknowns about AMP grazing, especially when it comes to its scalability. Outside of academic studies, it can be difficult to measure the changes to carbon level in soil over time. The amount of carbon stored can vary greatly based on the types of soil present, temperatures and precipitation levels.

Plus, the amount of land needed to raise grass fed cows is greater than that needed to raise the same number of cows in feedlots. And using more land to raise cows could exacerbate losses of soil carbon, especially if intact ecosystems are destroyed as a result. If that occurred, the benefits of AMP grazing wouldn’t outweigh the environment harm done. It's why Heller say people should still reduce how much beef they consume.

Widespread expansion of AMP grazing will likely depend on consumer demand and additional incentives in the form of for farmers to make the switch.

But that has not stopped farmers like Heller from making changes they believe can help address human-driven climate change.

"These guys are doing most of the work on the farm. I get to open the gates and say have at it."