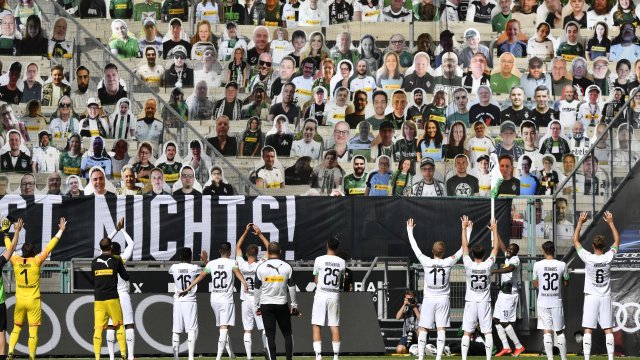 When U.S. sports restart, the game broadcast will look and sound different with no crowd. Fans can look abroad for clues on how it will be affected.

Some American sports leagues are finalizing plans to restart as soon as next month. With no crowds, the game broadcast is guaranteed to look and sound different. But fans can look overseas for clues on how the pandemic will affect the show.

One common novelty involves cardboard fans in the stands.

"For four or five seconds, if you look at the cards you can almost think that there are people," said Marcus Thuram, a soccer player with Borussia Mönchengladbach in Germany.

Or scratch the cardboard and replace them with stuffed animals, courtesy of the South Korean Hanwha Eagles. A soccer club in Denmark is taking things to the next level with a Zoom watch party for thousands of fans it displays live in the stadium.

"You could see the families at home watching the game, and that was quite fun. We had some prerecorded noise and then we took some noise from some of the different meetings. And then we mix that together to create some sort of an atmosphere sound at the stadium," said Søren Højlund Carlsen, head of media at AGF, the Danish soccer club.

And then there's an app in Japan that lets soccer fans cheer — or boo — players from the comfort of their couches.

A simpler idea to enhance games' soundtracks is for live broadcasts to add artificial crowd noise. That's what Germany's top soccer league did, with mixed reviews.

"I remember watching the first game that was broadcast in the German league. And it was silent. And then the next week, they added crowd sounds, and I've got to tell you, that made a difference," said John Sweeney, a professor of sports communication at the University of North Carolina at Chapel Hill.

"After a while, I think it actually detracts. It's so loud. It never ends. It's just like this droning on, so maybe it needs a balance," said Joanne Gerstner, a sports journalist in residence at Michigan State University.

Fans can expect the same in the U.S. Networks are reportedly trying to come up with pumped-in noise that sounds as authentic as possible.

"They are going to do a whole series of experiments. And someone's going to crack it," said Sweeney.

The curtain on reimagined American sports will rise with Major League Soccer and the NBA, both expected to start in July at the Walt Disney World Resort in Orlando, Florida.

"Having Disney kick this off first is going to set the bar really high for everybody else. This is a great opportunity for somebody to make a really cool name for themselves and deliver something special for us at home," said Gerstner.

Messi put Argentina ahead in the 35th minute with his third goal at this year's tournament and ninth in total at the World Cup.