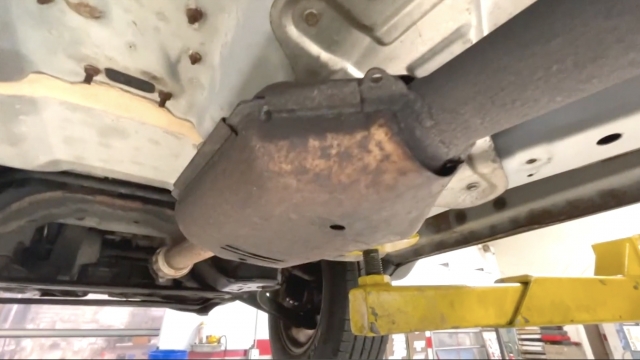 SMS
There's A Rise In Catalytic Converter Thefts Across The U.S.
By Cat Sandoval
By Cat Sandoval
August 17, 2022
Rhodium is used in car converters, but as the rarest metal in the world, it's also valued for jewelry, high-end mirrors, and electrical devices.

It doesn't take long; A quick slide under a car and moments later the thief emerges with a catalytic converter stolen for the precious metals inside.

"You just hear every day or every week somebody in my neighborhood is getting their catalytic converter stolen," Tempe, Arizona motorist Scott Cook said.

The thieves get as little as $50, but the metals inside include rhodium, which is the rarest metal on earth.

There's only a gram or two of rhodium inside, but an ounce of the silvery metal can top $15,000.

Rhodium is used in converters with palladium and platinum to reduce exhaust gases, but as the rarest metal in the world, it's also valued for jewelry, high-end mirrors and electrical devices.

In Tampa, police busted one recycler last year who advertised on social media he was paying cash for converters and seized his paper work.

"It showed that he had made well over $800,000 in about a year's time just with the receipts we found in the home," Tampa Police Department Officer Greg Noble said.

"I started my car and it sounded like a race car," West Palm Beach, Florida theft victim Pamela Beady said.

That was her first clue that something wasn't right.

"There was metal pieces laying under the ground underneath," she continued.

The catalytic converter on her new 2022 Mitsubishi Outlander was gone and cost $1,000 to replace.

"I'm like, 'Man, if I would have just known that these were high-targeted,' because there are things that you can do to your catalytic converters to prevent thieves from taking them," Beady said.

In West Palm Beach, one way people are trying to prevent theft is by having their car's VIN number etched onto the converters.

"If customers will call us, if it's not one of our customers, ask them for the VIN number," mechanic Ron Katz said. "We are more than happy to do that. There are other Midas's around the country now that are also starting this initative."

In Phoenix, Midas teamed up with the Maricopa County State's Attorney to push for VIN number markings.

Painting them different colors is also an attempt to cut thefts. In Chicago next month, a pilot program will include spray painting the converters hot pink and marking them with a Chicago Police Department stencil.