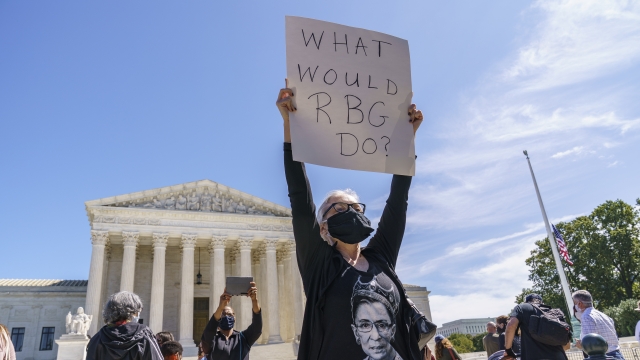 "Now you're the notorious RBG... sure biggie... what do you have in common with a notorious B.I.G. — one thing in common — both born and bred in Brooklyn, New York."

We're looking at some of the most memorable moments with the late Justice Ruth Bader Ginsburg.

Ginsburg showing off her intense workout on the "Late Show" with Stephen Colbert two years ago.

Whether you agreed with her politics or not, it's difficult to deny that the life and accomplishments of Justice Ruth Bader Ginsburg were notorious.

A play on the famous rapper's name that Justice Ginsburg herself identified with.

Here's what the author had to say about the comparison.

"Her notoriety. Her incredible superhero status in American culture was something that people were sort of yearning for, and especially young people and young women. We just don't have that many role models to look up to who had achieved what she had achieved and also who had fought so much in her own life for the values that we're still fighting for today."

When asked about the nickname, Justice Ginsburg said she understood the comparison, and in some ways, identified with the "Notorious B.I.G." herself, pointing out they were both born and bred in Brooklyn.

But when asked about a possible singing career, the justice said that was one talent she sadly did not possess, though she was a lover of opera, one thing she enjoyed often with the late Antonin Scalia. An unlikely friendship -- the two of them would often go to operas together. In fact, there's an opera written about their friendship."