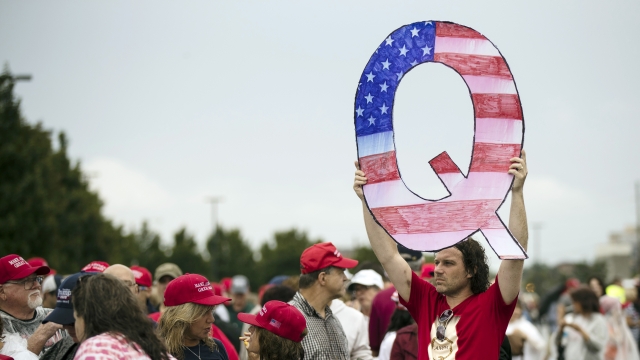 President Trump’s embrace of Greene and QAnon launched the conspiracy into mainstream political and social media circles, despite the group being linked to real-world violence and anti-semitic views.

Experts say the COVID-19 pandemic has also boosted the popularity of QAnon.

“Around March, which is when Lockdown was really impacting the US at first, there's a huge spike in people interacting with QAnon on mainstream social media," says Blyth Crawford, Research Fellow at the International Centre for the Study of Radicalisation and Political Violence. "I think people are just finding so many more hours in the day nowadays to spend falling down rabbit holes online about conspiracy theories.”

Q Followers, which number in the millions on Facebook, get their information from Q, their anonymous online leader. QAnon holds wide-ranging beliefs, but the uniting view is that there’s a group of Democrats and celebrities who secretly control the government and are responsible for various evils, like abusing children. Q says Donald Trump will eventually expose and arrest those involved.

Experts told Newsy that at the start of the pandemic, QAnon infiltrated fringe and conspiracy groups and absorbed members as their own, who then spread Q theories.

“The pandemic has really allowed them to spread online because of the number of anti-masking and anti-shutdown groups that formed specifically on Facebook," said Sophie Bjork-James, Assistant Professor of the Practice in Anthropology at Vanderbilt University. "They're very savvy in spreading and in figuring out the best way to spread their message, and that is often through tying their interests or their interpretation of Q into other movements, and especially around saving children and anti-trafficking.”

QAnon did this by hijacking the #SaveTheChildren hashtag. It was originally connected to a charity, but QAnon started using it to make baseless claims about what celebrities they think are involved in trafficking. Interactions on Facebook posts with the hashtag have gone up over 500% since early July.

“There are people who've never heard about Q but want to do something that feels that they are contributing to helping and causes associated with human trafficking," Crawford said. "And it's not until you become more familiar with what QAnon is specifically that you figure out all these different layers. But at that point, you're already involved with the movement, which seems like a great humanitarian cause.”

“The underlying principle of the algorithms is to drive traffic. And so they're trying to kind of figure out, what do people want? The internet facilitates it," said Mike Posner, Director of the Stern Center for Business and Human Rights, New York University.

“Someone can be pro-gun, pro-hunting even, and join a pro-hunting group on Facebook. And then suddenly be exposed to QAnon. Or, same thing with someone might be suspicious of vaccinations," said Bjork-James.

Facebook, Twitter and YouTube have started removing thousands of these accounts. But experts told Newsy to effectively counter QAnon misinformation, platforms need to change how they moderate borderline content. For example, while Facebook originally blocked the #SaveTheChildren hashtag, they later reinstated it.

“The platforms have said, you know, we're going to be vigilant and they have been quite vigilant and taking down things that are demonstrably false," Posner said. "But now so much of that is sort of drifted into the political space that that even becomes complicated for them.”