How The Country's Opinion Of Vaccines Has Changed In 365 Days 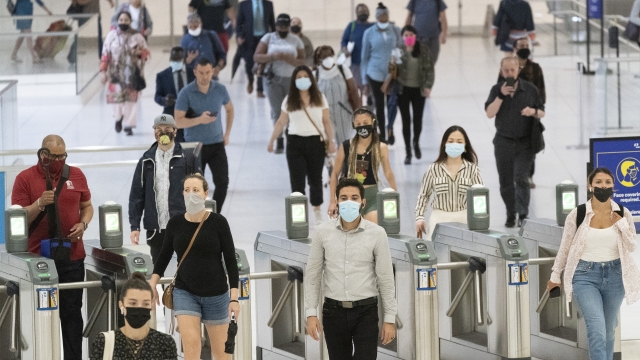 SMS
How The Country's Opinion Of Vaccines Has Changed In 365 Days
By Andrew Rafferty
By Andrew Rafferty
December 14, 2021
The reasons range from concerns over the quick approval process and side effects, to objections to government mandates and misinformation.

It was a historic achievement celebrated by a Republican president eager to take credit for helping make it happen.

"Before Operation Warp Speed, the typical time frame for development and approval, as you know, could be infinity," former President Donald Trump said. "And we were very, very happy that we were able to get things done at a level that nobody has ever seen before. The gold standard vaccine has been done in less than nine months."

Now, one year after the first doses of COVID vaccine were administered in the U.S., it's members of former president Trump's own party who are most hesitant to get vaccinated, limiting the impact of the scientific breakthrough.

"People who identify as Republicans make up an increasingly disproportionate share of the unvaccinated people," Kaiser Health News correspondent Rachana Pradhan said. "Political partisanship is the strongest predictor of whether someone is vaccinated as opposed to other sorts of demographic factors like age, education levels, race and ethnicity, whereas early on, you know, it was a mix of a bunch of different things."

Kaiser Health's vaccine monitor found less than 60% of Republicans were vaccinated as recently as November. That's compared to 73% of all adults who have gotten at least one shot, and 91% of Democrats.

With the vaccine now having been widely available for months, public opinion experts say those who still haven't gotten their shot are unlikely to be persuaded.

"As the proportion of unvaccinated within the population has gotten smaller and smaller, we found that most tend to be more entrenched in their hesitancy, and most tend to be pretty unlikely to get the vaccine," IPSOS vice president Mallory Newall said.

The reasons for those holding out range from concerns over the quick approval process and side effects, to objections to government mandates and misinformation.

"I think when you see where people are getting their information from — they're getting it from social media, you know, they're more likely to be told by other news sources or even other, you know, trusted community leaders that 'It's not a big deal. COVID is not a big deal,'" Pradhan said.

Still, with nearly three quarters of the U.S. population now having received at least one shot, it's easy to forget polls showed a majority of the country said they were unlikely to get the vaccine in the months leading up to its release.

"We saw in our data, initially, that people were kind of spread out all over the map in terms of how likely they were to get the vaccine as soon as it was released. And then after FDA approval, after it became much more tangible, we saw a fair amount of movement toward more openness, more willingness, saying that you were very, or somewhat likely, to get vaccinated," Newall said.

This is a trend that health officials hope repeats itself now with booster shots, as cases spike and new variants emerge. The CDC warns that the unvaccinated are 14 times more likely to die of COVID compared to fully vaccinated people.