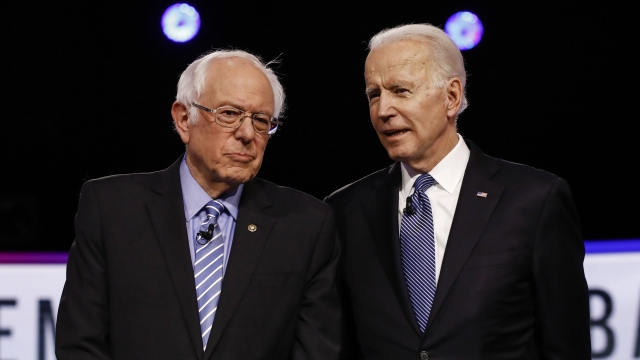 SMS
How President Joe Biden Made Inroads With Progressives
By Shira Tarlo
By Shira Tarlo
February 15, 2021
The president has formed an early working relationship with progressive Democrats, easing concerns about an intraparty battle.
SHOW TRANSCRIPT

President Joe Biden has been in the White House less than a month — and so far, he's managed to curry favor with the party's left wing, staving off an intraparty battle that previously seemed all but certain.

"They've been really great at outreach," Rep. Mark Pocan, chair emeritus of the Congressional Progressive Caucus, said of the Biden White House in an interview with Newsy. "You can tell Joe Biden's not a rookie — he's done this before."

"What I've been excited about is that there's been real meaningful conversations," Nelini Stamp, the national organizing director of the progressive Working Families Party, said of the Biden administration in an interview.

Progressives — many of whom backed Sens. Bernie Sanders of Vermont or Elizabeth Warren of Massachusetts in the Democratic primary — are encouraged by the president's decision to tap many of his former rivals' staff for administrative posts. And top aides have made progressive outreach a priority.

"Ron Klain versus, say, Rahm Emanuel. For progressives, it sends a message that is welcoming — that we have a seat at the table," Caitlin Lang, a spokesperson for the Progressive Change Campaign Committee, said of the president's chief of staff.

The hiring decisions are the result of over two years of organizing by progressive groups, which culminated in a 90-page report filled with personnel recommendations and submitted to the Biden transition team before the inauguration.

"If you have the right people in the right spots, that certainly helps to have progressive initiatives move forward, and there's been a good number of those appointments that we've been very satisfied with," Pocan told Newsy.

The current peace between the party's old guard and new left is perhaps unexpected. On the campaign trail, Biden was regularly attacked by progressives as they sought to portray him as out of step with today's Democratic Party.

"Nominating a fellow Washington insider will not meet this moment," Sen. Elizabeth Warren said in March of then-candidate Biden at a campaign event.

But even though President Biden ran explicitly against the party's left wing, on the sidelines, he courted progressives with proposals to lower the age of Medicare eligibility from 65 to 60, cancel student debt and the establishment of the Biden-Sanders Unity Task Force.

"What came out of that task force was really fruitful. Biden hasn't come out in favor of the Green New Deal, but a lot of his policies are very Green New Deal-oriented," said Marcela Mulholland, the political director at Data for Progress, a progressive think tank and polling firm.

The president's sharp focus on the pandemic and reversing his predecessor's policies has helped him bring factions of the Democratic Party under one tent.

"It's representative of an administration that's listening to the people through the election in November, and then working with those of us who've been some of the strongest advocates in Congress for those issues," explained Pocan, one of the most outspoken progressives on Capitol Hill.

The White House did not respond to Newsy's request for comment, and how long the goodwill between these wings of the party will last is unclear. But progressives say they've never been as "well positioned" to exert their "political influence."

"Now, you have a much more well organized and robust progressive movement that organized really hard and fought really hard for Biden to be elected," Mulholland said. "The left is committed to staying engaged, to making sure that Biden is held accountable to the campaign promises that he made."

"What we're continuing to do is hold this administration's feet to the fire," said Stamp of the Working Families Party.